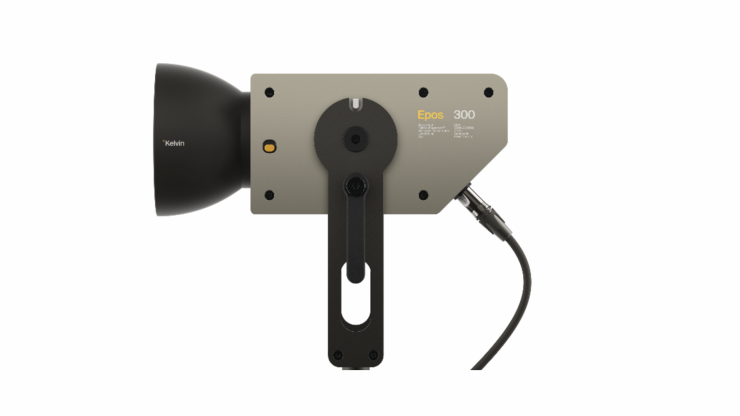 The Kelvin Epos 300 Full RGB LED Light is the first fixture in a new line of products that are being designed to push the boundaries of cinema lighting.

Encased in 6mm thick aluminum plates, the Kelvin Epos 300 is a full color spectrum 300W LED COB studio light, engineered, and handmade in Norway. It is said to be designed and built without compromise and it comes with a 3-year warranty.

The light has a very industrial edge to it which I personally like. It does look a little bit like a Prolycht 300FS with the build quality of an ARRI Orbiter.

The Kelvin Epos 300 Full RGB light is claimed to have best-in-
class LUX output per watt, as well as offering seamless and intuitive control of the light via the Kelvin Narrator Bluetooth app, DMX, or Lumen Radio Skynode (included in the box).

The Kelvin Epos 300 is compatible with a Bowens mount and it can be powered by 2x V-Mount Batteries or an AC power supply.

The total weight of the Kelvin Epos 300 is 8.06 kg / 17.4 lbs. Here are the individual weights of the various components:

Kelvin is a new lighting brand developed by LED technology company Rift Labs from Scandinavia. Rift Labs has been manufacturing award-winning cinema lighting fixtures and lighting software for the global video and photography market in video and photo since 2010 and they have sold more than 50,000 products.

The headquarter of Kelvin is located in Oslo, Norway with offices in Berlin and they will soon open an office in New York.

The Kelvin Epos 300 is now available to pre-order at www.kelvinlight.com for $2,499 USD. It is scheduled to start shipping in September.

Every light comes in a waterproof and durable rolling hard case.