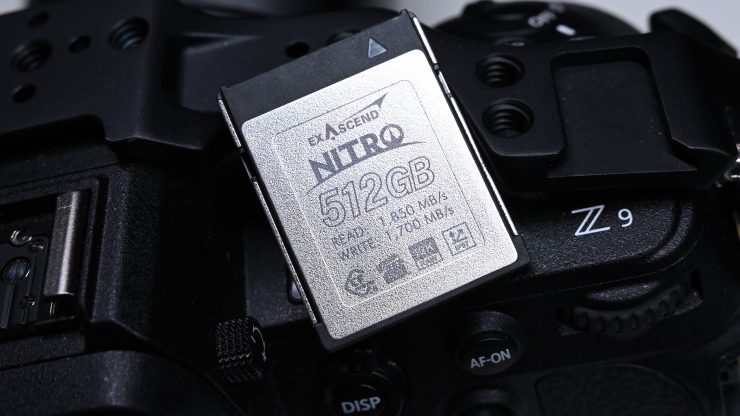 Exascend states that the Nitro card has sustained write speeds that make it perfect for use with cameras such as the Canon EOS R3, EOS R5, EOS R5 C, Canon EOS-1D X Mark III, and Nikon Z9.

The cards are available in two capacities:

For this review, I will be testing out the 512GB version of the card.

The Exascend Nitro has been certified VPG400 by the CompactFlash Association using its stringent Video Performance Guarantee Profile 4 (VPG400) qualification. This means that the Nitro CFexpress is capable of delivering sustained video recording performance in even the most demanding cinema camera systems. To get VGP400 certification a card needs to be able to provide sustained write speeds of 400MB/s without dropping any frames.

The 512GB capacity is over three times the capacity of existing VPG400-rated CFexpress Type A cards, which until now, were the only cards with a VPG400 rating.

CFexpress cards have only been around for a few years and higher capacity versions can be expensive. With more and more cameras starting to come out that are recording to CFexpress Type B, hopefully, prices will eventually start to come down. What you clearly need to know with most types of media is that they aren’t all created equal. Different cards have varying degrees of performance and often card manufacturers won’t quote minimum sustained speeds, instead, they quote maximum possible read and write speeds. This can make choosing the right card confusing.

With the design of the PCIe Gen3 interface, the fastest cards can provide speeds of up to around 1850 MB/s read and 1800 MB/s write, which is over 3 times faster than the best CFast 2.0 and XQD cards.

According to Exascend, the Nitro CFexpress’ has sustained 1,850 MB/s read and 1,700 MB/s write speeds.

There are currently no cameras on the market that require sustained write speeds above 850MB/s that utilize CFexpress Type B cards, but who knows what is likely to come in the future.

So what are the claimed minimum sustained speeds of the cards? Well, below you can see the ones that I was able to find information about.

It is also equipped with a next-generation CFexpress flash storage controller, Exascend Nitro CFexpress is future-proof and user-upgradeable to the next generation of CFexpress.

So when I mounted the ExascendNITRO 512 GB CFexpress card it shows the actual capacity as being 511.93 GB. Given the RED Mini Mag controversy, it is good to know that you are getting what is being advertised. However, with some memory cards and media, companies reserve more space for buffer cleaning purposes which offers more stable writing performance.

Above you can see that Exascend Archon 1TB card is one of only two cards that are certified for use with the V-Raptor. Even though the Exascend NITRO cards are more than capable of meeting the requirements they haven’t been certified by RED.

In contrast, the Canon R5 only needs a card that is capable of sustaining 400MB/s to record 8K RAW. This means you don’t necessarily need to buy a high-performance CFexpress Type B card if you are just using this camera.

The card should also have no problems recording 8K RAW from the Nikon Z9. The data rate for recording 8K 60p in N-RAW (High-quality setting) is 850MB/s. I will test this further down in the review.

What you clearly need to remember, and this goes for any type of media, is that transfer speeds will vary depending on both the read and write speeds of your card, your card reader, and what type of hard drive you are transferring to, and the specifications of your computer.

If you are using a CFexpress card and transferring to an HDD drive, you won’t be getting fast transfer speeds. If you are transferring to a very fast SSD then you will see lightning-fast offload speeds as long as your computer utilizes USB3.1 Gen 3.

I did a few tests to see what the sustained read/write speeds of the Exascend NITRO 512GB CFexpress card were.

For the sustained read/write speeds I was using the brand-new 20 Gbps CFexpress reader. Without a 40 Gbps Thunderbolt 3 card reader, my results are going to be limited by the reader I am using, primarily because my iMac Pro doesn’t have USB3.2 only USB3.1.

Above you can see the results for the Exascend NITRO 512GB card with the stress set to 5GB.

As a comparison, above you can see the exact same test using the OWC Atlas Pro Ultra 320GB card.

As another comparison, above you can see the same test for the Wise Advanced 320GB Pro CFX-B Series CFexpress Type B Memory Card.

If you want to see why the sustained read and write speeds are not the same across all CFexpress Type B cards, above you can see the same test with an affordable PERGEAR 512GB CFE-B Pro card.

I also tested the Exascend NITRO 512GB card using the AJA System Test Lite software under a 64GB load to see what the read and write speeds were. The write speeds are super consistent. Look at how stable the green line is. This is the best result I have seen from any CFexpress Type B card.

As a comparison, above you can see the same test using the OWC Atlas Pro Ultra 320GB card. The OWC has a ton of frame drops and it can’t match the Exascend when it comes it sustained write performance.

Ok, so let’s have a look at how the Wise Advanced 320GB Pro CFX-B Series CFexpress Type B Memory Card performs. Above you can see that this card also had quite a few dropped frames.

Finally, let’s run that same testy with a much more affordable card, in this case, the PERGEAR 512GB CFE-B Pro card.

As a comparison, above you can see the same test using the OWC Atlas Pro Ultra 320GB card. Again, look at the difference. The OWC isn’t able to offer the same level of consistency.

As another comparison, above you can see the difference when using the Wise Advanced PRO 320TB CFX-B Series card.

Finally, let’s run that same testy with a much more affordable card, in this case, the PERGEAR 512GB CFE-B Pro card. This clearly shows you why the performance of CFexpress cards isn’t the same.

What you clearly need to remember, and I am going to reiterate this over and over, is that the CFexpress Type-B card readers can be a stumbling block when it comes to speed. There are currently only a very small number of Thunderbolt 3 CFexpress card readers available. The majority of readers are only USB3.

I tested the Exascend NITRO 512GB card out with the Nikon Z9 and set the camera to record 8K 60p N-RAW. The Z9 when recording 8K 60p in N-RAW (High Quality setting) requires a card with a sustained data rate of up to 850 MB/s.

I was able to record 8K 60p N-RAW in the High quality setting without encountering any problems. This didn’t come as any big surprise as the performance of the card exceeds the requirements for recording 8K 60p N-RAW.

I also tested the card out with the Canon R5 and set the camera to record 8K RAW. The card worked without any issues and I was able to record 8K RAW without encountering any problems.

The Exascend Archon 512GB card retails for $699 USD. The 1TB version of the card costs $1,199 USD. This is certainly not cheap, but depending on what camera you are using and what resolution, frame rate, and recording format you need to capture, it pays to buy the correct media.

As you can see, the Exascend NITRO 512GB card is one of the most expensive cards on the market, however, it offers outstanding performance and comes with a 5-year warranty as well as a data recovery service.

If you own a Z9 and plan on recording 8K RAW then this is definitely a card worth considering. It offers outstanding performance and it is capable of recording anything that you can throw at it.

The card performed very well in my tests and the sustained read and write performance is very impressive. With some cards, you really do pay for what you get.

The Exascend Nitro CFexpress comes with a five-year global warranty that covers any issue with the card and its components. For accidents and damage that render customers’ footage inaccessible, Exascend offers a factory data recovery service that can retrieve data from even severely damaged cards.