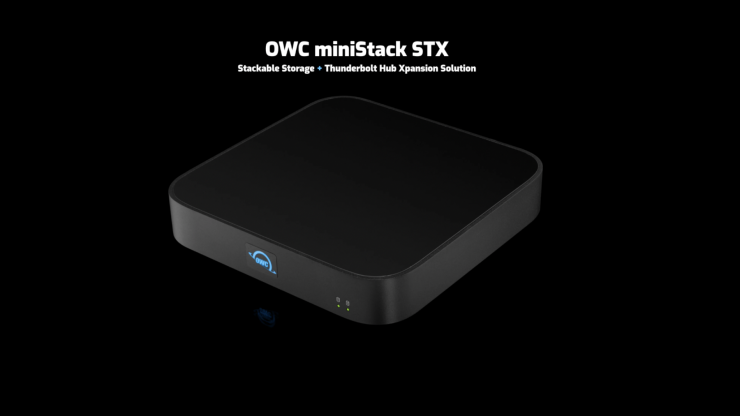 The OWC miniStack STX is the latest addition to the miniStack family that has been around since 2005. miniStacks have always been designed as a nice compliment to the Apple Mac Mini, and while that is still the case, you can also use them with any desktop or laptop as well.

The new miniStack STX features storage and Thunderbolt Xpansion, and according to OWC it is the world’s first Thunderbolt certified Thunderbolt 4 storage solution. It was primarily designed to be a jack of all trades solution that offers connectivity and multiple storage options.

The miniStack STX is equipped with a universal SATA HDD/SSD bay and an NVMe M.2 PCIe SSD slot. Three Thunderbolt (USB-C) ports enable you to connect to Thunderbolt, USB, and future USB4 drives, displays, A/V mixers, cameras, and tablets; as well as desktop accessories like a keyboard, card reader, or mouse.

The miniStack STX is identical in size to the Mac mini. It isn’t small, but it isn’t gigantic either, so you could also use it with a MacBook or PC notebook, desktop machine, iPad, and Chromebook.

Because they have been designed to be stackable you can create nice, neat mini-towers.

The universal SATA drive bay holds a hard disk drive or SSD for increased capacity data storage performance. When you need to support low latency instant access operations, such as video editing, the NVMe M.2 SSD slot makes for a good addition. NVMe was designed to deliver the speed potential of modern flash drive technology by using a more direct path to a computer’s processor over PCIe.

With multiple drive configurations available, you can get up to 770MB/s of real-world data transfer speed. This allows you to move 5GB of video footage in about 6 seconds. No, this isn’t blindingly fast, however, it is more than sufficient when working with a lot of footage from today’s modern cameras on a decent computer.

You can use the SATA drive for Time Machine or File History backups while working off the NVMe drive.

The miniStack STX has three Thunderbolt (USB-C) ports for connecting devices and one more for connection to a computer. There is also a 20V DC input.

The miniStack STX was designed so you can connect up past, present, or future devices/accessories via three Thunderbolt (USB-C) ports. These three ports allow you to create three independent chains with up to five total Thunderbolt devices with a USB device on the end of each chain (for 8 devices total). You can now also remove devices from one chain without affecting the other chain(s).

The OWC miniStack STX is well made and it features a rather understated design. The OWC insignia does light up on the front of it.

How easy is it to set up?

The OWC miniStack STX is pretty much plug-and-play. When you first hook it up to your computer you launch the OWC Drive Guide which then asks you how you would like to configure your drive.

Once you select your option you click next and that is all you have to do.

The OWC miniStack STX isn’t going to give you mind-blowing speeds even if you are using an NVMe. OWC claims that the miniStack STX can provide speeds of up to 770MB/s.

Above you can see a speed test done with the 2TB 7200rpm HDD.

Above you can see a speed test done with the OWC Aura P12 Pro NVMe. Even though this SSD is capable of write speeds of up to 3000MB/s and read speeds of up to 3200MB/s you aren’t going to get anywhere near that if you use this inside an OWC miniStack STX.

You can use OWC’s SoftRAID software with your miniStack STX and create a RAID 1 to automatically maintain identical copies of all your data on each drive. SoftRAID has been around for more than 25 years and it s a good software RAID solution for Mac and Windows.

SoftRaid starts protecting your data even before you start saving by validating the miniStack STX drives are safe for data storage. In the improbable event that you experience a disk issue, your data is still complete and accessible on the miniStack STX’s other drive.

SoftRAID constantly monitors your disks with a combination of S.M.A.R.T. (Self-Monitoring Analysis and Reporting Technology) attributes along with its own I/O statistics. This deep dive disk health analysis identifies potential problems so you can take preventive action. As SoftRAID is available for both Mac and PC it allows you to share the miniStack STX between computers if you need to.

I was using the OWC miniStack STX with an Apple MacBook Air, primarily as an expansion hub, that I could also use to do dual backups of material I was shooting on the road. While it isn’t the fastest device, it was generally quick enough for backing up CFast 2.0 cards which is the primary media I use. I could make one back up to an NVMe drive that I could also use to edit from, while also making another backup to the HDD drive.

The miniStack STX also has enough inputs that I could comfortably hook up additional drives and card readers if need be.

Was this the perfect solution for doing this type of thing? Probably not, but it still worked reasonably well. Usually, with my laptop, I use an expansion hub that needs to be powered anyway, so the miniStack STX wasn’t a big departure away from that. As I had two drives installed inside it sort of made sense to use it instead of the expansion hub and attaching multiple drives.

The OWC miniStack STX is now available in various configurations.

You can also configure the enclosure with whatever combination of HDD/SSD and NVMe capacities that suit your needs.

The miniStack STX is a nice little device, but it is best viewed as a jack of all trades and master of none. It can certainly be used for a variety of purposes, but the speeds it offers are a little on the slow side and that may keep a lot of people from considering it.

In a lot of ways, the miniStack STX is a little niche, but it is likely to appeal primarily to owners of the latest Mac Mini’s.