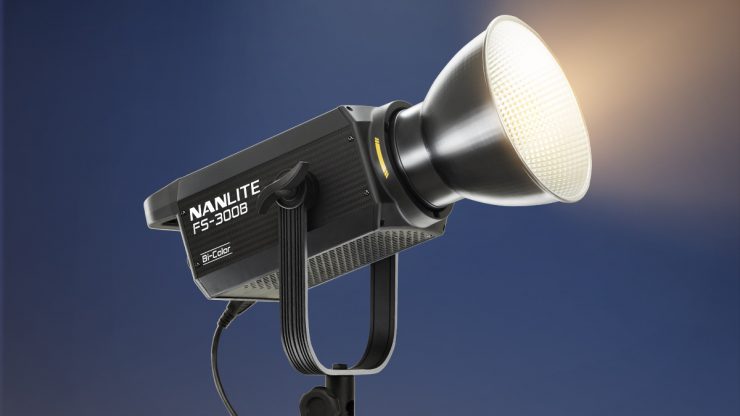 Nanlite has announced the FS-300B, a budget-friendly bi-color LED spot light that features an all-in-one design.

The FS-300B has a maximum output mode, but it can also be used in a constant output mode where the output is claimed to offer a consistent output across its 2700K to 6500K Kelvin color temperature range.

As far as color quality and accuracy are concerned, Nanlite claims that the fixture has an average CRI of 96 and an average TLCI of 97. The light also features 12 built-in practical effects that can be adjusted by brightness, color temperature, and speed.

Nanlite has designed the FS-300B so that it is a self-contained unit, which means there is no separate controller or power supply. On the back of the light there are two knobs and one button. An OLED display allows you to see the status of the light and make changes. The light also incorporates shortcut presets for recalling settings. The built-in Bluetooth and 2.4G module support an optional wireless controller as well as the Nanlink APP.

To keep the fixture cool, there is an in-built fan. The fan can be turned off, however, that will limit the output to just 25%. A built-in USB-A port supports firmware updates.

As it utilizes a Bowens mount you can use a wide array of affordable lighting modifiers. Nanlite also makes quite a few of its own accessories for the light.

The Nanlite FS-300B looks to be in direct competition with the amaran 200x Bicolor LED Light and the Godox Litemons LA200Bi Bi-Color LED Light. It has a higher power draw, and more output, while not costing that much more than those lights I just listed.