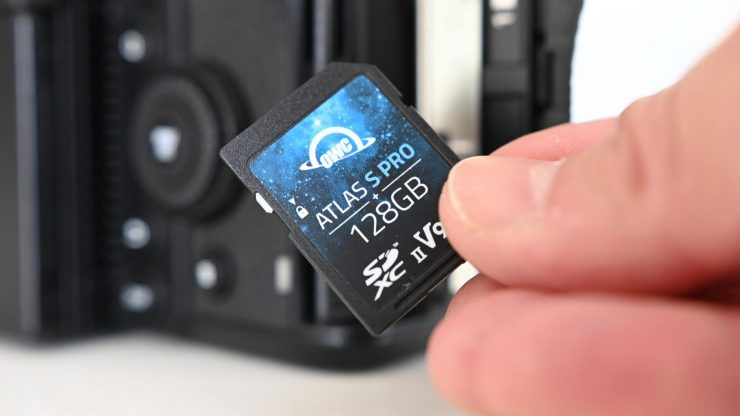 If you are after a V90 rated SD card, then the OWC ATLAS S PRO SDXC UHS-II V90 Media Cards may well be worth looking at. They were announced around 5 months ago and I was interested in looking at them a little more closely.

The OWC Atlas S Pro cards can be used in the following temperatures:

They are also able to endure the toughest of environmental challenges including x-rays, UV rays, shocks, and drops.

Even with a lot of cameras transitioning to CFexpress Type B cards, there is still clearly a demand for V90 SDXC UHS-II memory cards. SD cards are still likely to dominate the market over the next few years and it is interesting to see that companies like Apple still put a built-in SD UHS-II slot in the latest MacBook Pro and MacStudio models.

SD cards, even V90 rates ones are hardly the fastest form of media. As I previously mentioned, the OWC ATLAS S PRO SDXC UHS-II V90 Media Cards can provide speeds of up to 276MB/s write and up to 290MB/s read with consistent performance over the card’s entire capacity. To meet the V90 standard a card must have the ability to support a minimum sustained write speed of 90 MB/s. 90MB/s is going to cover most cameras that utilize SD cards as their recording media.

So how do these speeds compare to some other V90 cards on the market? Above you can see. There isn’t a big difference in claimed read and write speeds for any of the available 256GB V90 cards.

With cameras like the Canon C70 now having the ability to record internal RAW, there is certainly the need for larger capacity V90 cards. The OWC ATLAS S PRO cards, unlike most options on the market, are available in capacities of up to 512GB.

When I formatted the 128GB card and then mounted it on my computer it shows the actual capacity as being 128.27GB. Given the RED Mini Mag controversy, it is good to know that you are getting what is being advertised. However, with some memory cards and media, companies reserve more space for buffer cleaning purposes which is claimed to offer more stable writing performance.

Now, macOS does reports storage capacity differently from Windows. Apple uses base 10, while Windows uses base 2. Yes, this may well be a bit of semantics, but I am only using macOS, so that is the only way I am able to test the capacity.

I did a few tests to see what the sustained read/write speeds of the OWC card were and also how fast I could offload material through a USB-C card reader to an ultra-fast SSD.

For the sustained read/write speeds I was using a Wise SD USB-C card reader.

Above you can see the results for the card with the stress set to 5GB. This was an impressive result for a V90 card. It was able to sustain write speeds of 220.3 MB/s.

Above you can see the results for the card with the stress set to 1GB.

I also tested the OWC card using the AJA System Test Lite software under a 4GB load to see what the read and write speeds were. As you can see the average sustained write speed was significantly higher than the 90MB/s minimum that is required for V90 cards. Even the minimum write speed recorded during this test was 148MB/s. I have also included the results for the same test done with the Wise Advanced SDXC UHS-II Memory Card (512GB).

Above you can see how many frames per second the camera was capable of if you were recording 4K DCI in ProRes 422HQ.

As a comparison, above are the same tests when using a V90 rated ProGrade Digital 256GB UHS-II SDXC card and a Panasonic 128GB UHS-II SDXC card. As you can see the ProGrade wasn’t nearly as fast and it struggled when it came to how many fps it could write at a sustained level. The Panasonic performed better than the ProGrade, but if you look at the graph it did have moments where it dropped frames and write speeds. This just goes to show you that you can’t rely on the read speeds that are provided by certain companies. Not all cards are created equally, despite what specifications are written on the marketing material.

The OWC OWC ATLAS S PRO SDXC UHS-II V90 128GB had the best results of any V90 rated card I have tested so far.

Let’s have a look at how much the 256GB V90 options stack up against the OWC.

As you can see, most 256GB options are priced around the $300 USD mark, which makes the OWC very well priced given its performance.

Above you can see the comparison against a couple of the 512GB options that are also available.

If you own a camera that requires the use of V90 rated cards you want to make sure you get a good one. With cameras like the Canon C70 being able to record internally having a reliable card with good sustained write speeds is important.

The OWC Atlas S Pro UHS-II SDXC cards are very solid offerings with impressive sustained read and write speeds. The cards worked as advertised and I didn’t encounter any issues when using them. Everything you capture ends up on a card or drive, and while no media is 100% guaranteed to work without ever encountering any issue,s it always pays to use good quality media that performs well.