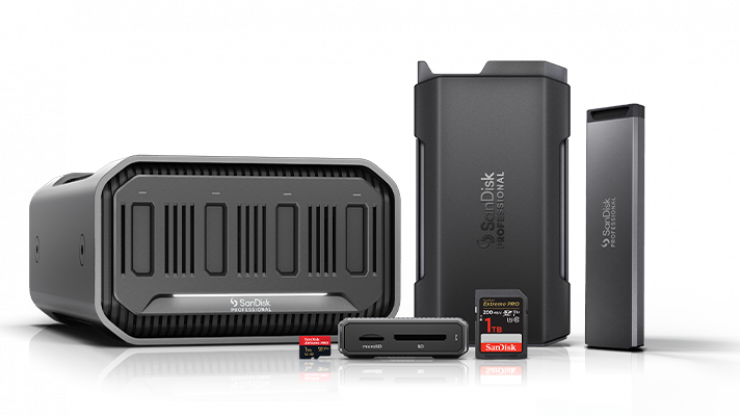 SanDisk has unveiled its new PRO-BLADE Modular SSD Ecosystem. Essentially this consists of an NVMe drive that goes inside a transport enclosure that can then be placed inside a larger PRO-BLADE STATION.

According to SanDisk, this SSD ecosystem was designed so that users can easily swap out PRO-BLADE SSD mags depending on how much storage they need. A lot of readers may well be asking well why bother having a separate enclosure when you could just put a USB-C connector on the actual drive itself? Well, SanDisk’s response would be that having the drive inside another enclosure provides more protection and durability when out on location. However, SanDisk also states that the PRO-BLADE SSD mag delivers 3m drop and 4,000lbs crush resistance, so you have to wonder why the need for the PRO-BLADE TRANSPORT enclosure?

The enclosure is not only supposed to provide extra protection, but it also features an aluminum heatsink to help cool down the drive so it can sustain high read and write speeds.

Attach it directly to your camera

With quite a few cameras now offering direct recording to external drives via USB-C, you can attach a PRO-BLADE TRANSPORT enclosure for longer recording times.

The PRO-BLADE Station was designed for professionals who are looking for a system that they can use to ingest, copy, and edit their content.

The desktop SSD enclosure utilizes a Thunderbolt 3 (40Gbps) interface so users can load and swap up to four high-capacity PRO-BLADE SSD mags at once for simultaneous offloading, real-time 4K/8K/12K editing, and super-fast copies. The PRO-BLADE STATION desktop SSD enclosure will be available late 2022 in the United States with pricing to be announced closer to product availability.

The PRO-BLADE TRANSPORT is available to purchase by itself or with a PRO-BLADE SSD. Below are the prices:

You will also be able to purchase the PRO-BLADE SSDs individually.