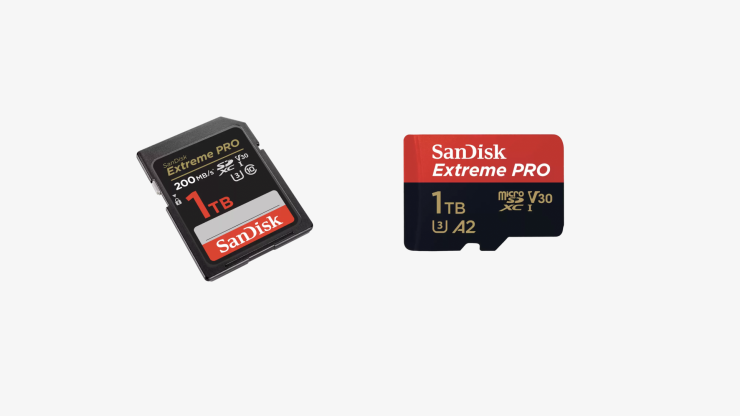 SanDisk has announced new Extreme PRO micro SD and UHS-I SD Cards. Both of these new lines are claimed to be the fastest UHS-I SD and microSD memory cards in the world.

The new SD UHS-I memory cards have a UHS speed Class 3 (U3) rating and Video Speed Class 30 (V30). They deliver claimed transfer speeds of up to up to 200MB/s and recording speeds of up to 140MB/s.They have been built to withstand weather, water, shocks and other less-than-ideal conditions.

The cards are available in capacities from 64GB – 1TB. They can be paired with the new SanDisk Professional PRO-READER SD and microSD to achive maximum speeds.

They include an offer for RescuePRO Deluxe 2-year data recovery software, which lets you restore images you accidentally deleted.

The new microSDXC cards were designed for use in Android smartphones, action cameras, or drones. The memory cards can achieve read speeds up to 200MB/s and write speeds of up to 140MB/s. They are available in capacities ranging from 64GB up to 1TB.

The cards are shockproof, temperature-proof, waterproof, and X-ray-proof.

The new SanDisk Professional PRO-READER SD and microSD card reader was designed specifically to use with the SanDisk Extreme PRO UHS-I cards that have SanDisk QuickFlow technology for high-speed offloads. It features a USB-C (5Gbps) port that enables fast media transfers. It is also compatible with USB Type-C iPad devices, G-RAID drives, and computers.

The aluminum enclosure of the reader is claimed to help keep your cards cool to help prevent overheating while you offload your media.

The card reader also features an integrated write-protect lock switch to help prevent you from accidentally overwriting your existing footage or images.

The SanDisk Professional PRO-READER SD & microSD device is expected to ship in June 2022 for $49.99 USD.