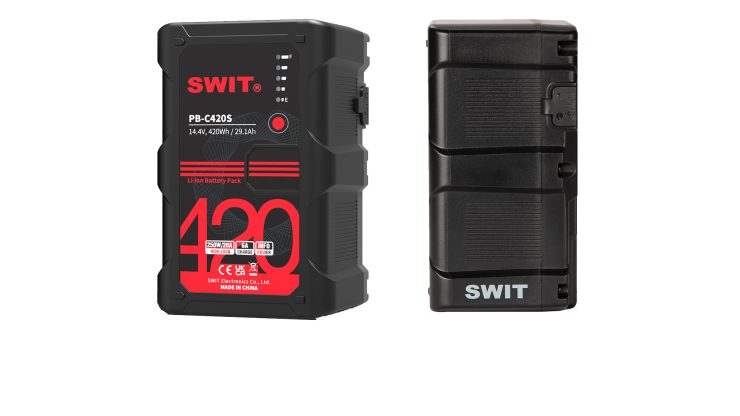 Swit has released what they state is the largest capacity battery available today. The PB-C420S is a 14.4V, 29.1Ah battery that can supply a constant power load of 250W/20A, and a peak load of 305W. The battery is made up of 24 individual Li-ion cells.

With more and more devices coming out that draw large amounts of power, higher capacity batteries are needed. The biggest caveat with high-capacity batteries you can’t travel with them on a plane. Most airlines limit the max capacity to 160wh, and even then you are only allowed to carry two batteries between 100-160Wh.

The largest capacity 14.4V V-mount batteries that I am aware of top out around 290Wh.

The new PB-C420S is currently only available in V-Lock. It is still unclear whether Swit will release the new battery in other mounts such as B and Gold Mount.

Swit states the PB-C420S outputs at least 250W/20A high load even at 1% capacity (Peak load up to 305W), to drive high-power Cine cameras and on-camera devices together. The high load cells will also ensure battery life compared to normal load batteries. The new battery features an over current protection of 24A.

The PB-C420S features two 150W/10A D-tap outputs and it has a five-level power bar indicator.

If you are running high-powered LED lights or large cameras with high power draws then batteries with a big capacity like this do make sense. With a peak load of 305W, a pair of Swit PC-C420S‘s should be able to power a 600-watt light at full power. That is something I would like to test!

At this time pricing and availability have not been released. I’ll update the article once it is announced.