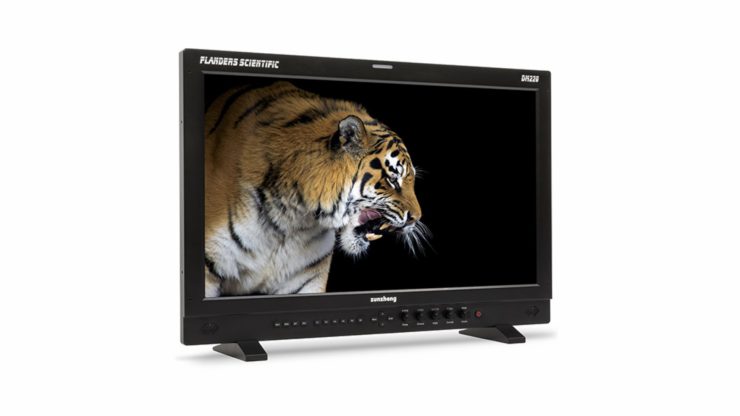 The DM220 is a high-contrast 22″ OLED monitor designed for use in color-critical production and post-production applications. It is claimed to feature industry-leading fast mode processing, a durable all-metal chassis, an impressive advanced feature set, and a compact and lightweight form factor.

Flanders Scientific told us that it will have a Zero Delay mode, direct integration with Pomfort Livegrade, and Assimilate Live Looks, a feature set that includes AutoCal and ScopeStream, Tetrahedral Interpolation, and a 1,000,000:1 contrast ratio.

The DM220 has two SDi In and two SDI outs, a monitor In and a monitor Out as well as a host of other inputs and connectivity.

The monitor also features a Real-Time Waveform and Vectorscope that update every frame. Scope position, background, size, and scale can be adjusted independently using the rotary knobs on the face of the monitor. Real Time scopes work in all processing modes including Zero Delay Fast Mode.

The DM220 can be powered via mains or through a 4-pin DC power source.

The Flanders Scientific DM220’S shipping date is TBD and it is expected to retail for around $6500 USD.