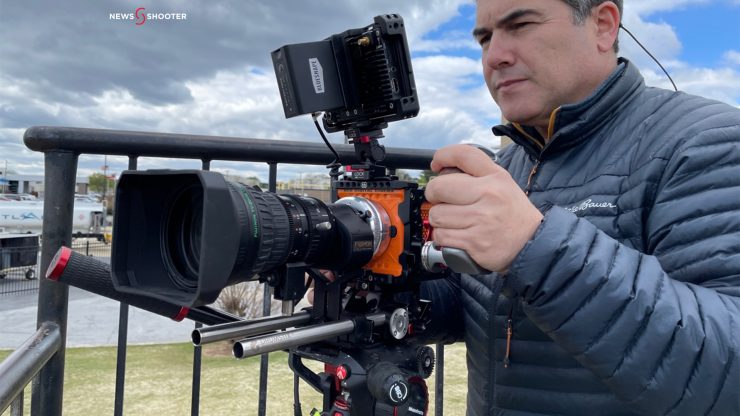 Adding a B4 lens to a modern cinema camera is not a simple task. B4 lenses are designed for smaller 2/3 chip sensors, and to get the most coverage, some kind of lens is usually needed behind or inside the mount. This solution is not designed for all cameras. It’s specifically for the RED V-RAPTOR and KOMODO.

Digital Glue has worked with Breakthrough Photography to develop a B4 to RF mount. They state that this is the first professional B4 to RF mount for the RED V-RAPTOR and KOMODO. This is a simple mechanical mount that allows owners of B4 2/3″ lenses to use them with the KOMODO at HD 120fps or UHD 60fps with the built-in doubler engaged. If you have a V-RAPTOR you can use a B4 lens to record HD and up to 240fps and UHD up to 120fps with the doubler engaged. As the RED cameras can do a center crop on the sensor, they will work with a large range of B4 lenses. Center crop mode effectively allows the camera to use these lenses that are designed for much smaller sensors. There are no optics inside the B4 to RF mount.

Adapters like these are pretty niche products and there are not going to be a ton of people putting a 2/3″ B4 lens on a RED. Yes, you could use a B4 lens in a live environment or broadcast scenario, but that is also true of any lens. What you also have to remember is that this is a mechanical adapter so it isn’t going to power a B4 lens and give you servo zoom capabilities. You would need to use an additional solution to be able to power the lens. Yes, you could just use the manual zoom ring, but then that kind of defeats the purpose of wanting to use a servo zoom lens in the first place.

It’s important to understand that a modern 2/3″ B4 lens will work the best. Older B4 lenses that are not designed for a single sensor will not give you the quality you will want. You will often also find that when using older 2/3″ lenses that were designed for use on CCD sensors that you will get pretty bad chromatic aberration on a modern-day sensor.