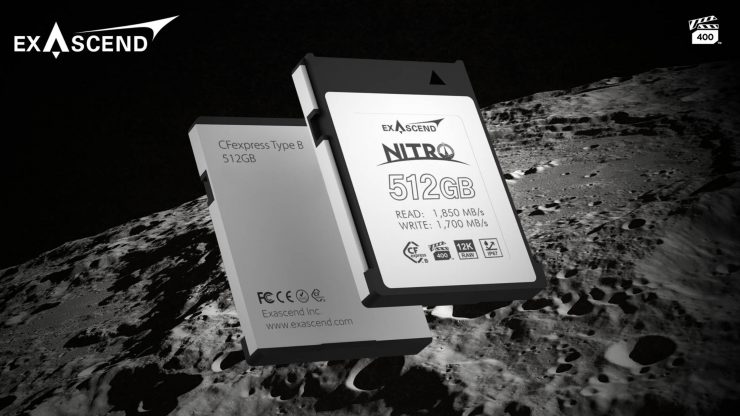 There are currently no cameras on the market that require write speeds of above 850MB/s that utilize CFexpress Type B cards, but who knows what is likely to come in the future.

Exascend states that the Nitro card has sustained write speeds that make it perfect for use with cameras such as the Canon EOS R3, EOS R5, EOS R5 C, Canon EOS-1D X Mark III, and Nikon Z9.

The Exascend Nitro has been certified VPG400 by the CompactFlash Association using its stringent Video Performance Guarantee Profile 4 (VPG400) qualification. This means that the Nitro CFexpress is capable of delivering sustained video recording performance in even the most demanding cinema camera systems. To get VGP400 certification a card needs to be able to provide sustained write speeds of 400MB/s without dropping any frames.

The 512GB capacity is over three times the capacity of existing VPG400-rated CFexpress Type A cards, which until now, were the only cards with a VPG400 rating.

The Exascend Nitro CFexpress comes with a five-year global warranty that covers any issue with the card and its components. For accidents and damage that render customers’ footage inaccessible, Exascend offers a factory data recovery service that can retrieve data from even severely damaged cards.

There is no official retail price yet, but the card is expected to be available in the next 2-3 weeks.