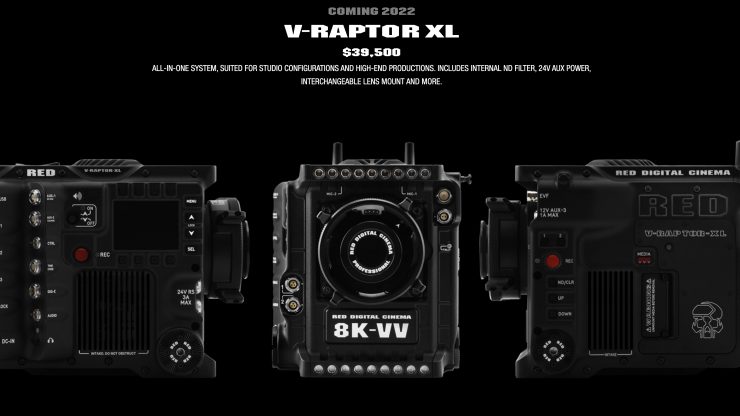 RED is teasing its new V-RAPTOR XL which is scheduled to be released sometime this year.

All we know so far is that the V-RAPTOR XL will cost $39,500 USD and that it has been designed as an all-in-one system in a similar fashion to some of the RED RANGER offerings. Instead of just being a brain, the V-RAPTOR XL features internal ND filters, interchangeable lens mounts, and 24V auxiliary power.

If you compare the V-RAPTOR XL to the V-RAPTOR you can see that it is considerably larger. The camera is a lot taller because of the integrated ND filters. You can also see that there are a couple of 3-pin Fischer inputs and an SDI output as well. This SDI output is for an EVF.

On the operator’s side of the V-RAPTOR XL, you can see the button for changing between clear and ND, as well as Up and Down buttons for adjusting the ND. There is no indication of whether this is an electronic variable ND system or just a normal ND system.