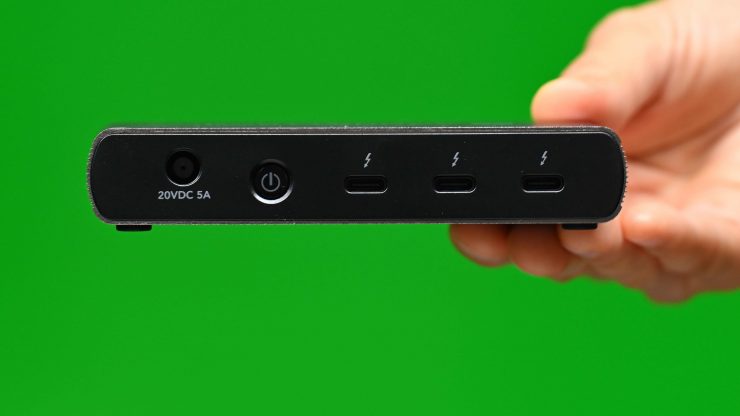 The Sonnet Echo 5 Thunderbolt 4 Hub was announced in December last year. The Echo 5 was designed to be a compact and versatile Thunderbolt 4 hub that can be used with laptops, desktops, and even some tablets.

Hubs have become increasingly more important with a lot of Apple laptops having very few ports. Even desktops can quickly run out of ports once you have a lot of devices connected.

The Echo 5 gives users a central hub to connect their storage devices, input devices, displays, etc. You can never have enough ports!

Sonnet’s Echo 5 Thunderbolt 4 Hub enables notebook and laptop computer users to connect to all their peripheral devices at once through a single Thunderbolt cable. Through the same cable, the Echo hub can also charge compatible computers with up to 85 watts of power.

The Echo 5 Thunderbolt 4 Hub comes with the following items:

It is nice that Sonnet gives you a Thunderbolt 4 cable as standard. Yes, this is a small thing, but at least you don’t have to try and source your own.

Despite having quite a few inputs, the Echo 5 Thunderbolt 4 Hub doesn’t take up that much real estate.

I have owned quite a few Sonnet products in the past, including their original SxS card reader which I used with my Sony F3. I also use their very good SF3 Series CFast 2.0 Pro Card Reader to ingest material from my main camera. I have always found their products to be reliable and robustly made.

The Echo 5 Thunderbolt 4 Hub follows in those footsteps and it is solidly made and well constructed. It has certainly been designed to withstand the rigors of field use.

The Echo hub’s 10Gbps USB Type-A charging port supports most USB peripherals, including superfast USB NVMe SSDs, at full speed. Unlike some other hubs, the USB Type A port on the Echo 5 provides up to 7.5 watts of power to ensure bus-powered devices will operate without fail and can be used to charge a phone or tablet.

When used with an iPad Pro with a Thunderbolt port, the Echo hub provides users the same capability to connect multiple devices to their tablet at the same time, while also charging it at full power. Users may also connect a single (up to 6K) display to mirror the content on the iPad’s built-in display.

The Echo 5 is virtually plug-and-play if you are using it with a Mac. The standard drivers for the Echo 5 are already part of macOS 11.1 or higher. This means you can simply plug it into your computer and power it up.

The dock is pretty straightforward to use, however, as it has inputs on both the front and the back you have to think carefully about where you position it on a desk if you are working with a desktop.

If you want easier access to most of the ports you could just turn it around and have the backside of the dock facing towards you. No, this isn’t as clean, but some users may find it more practical. The whole reason for wanting to use a dock with a desktop is not only for the added connectivity but also for the ease of access.

I wanted to see how it would perform if I loaded it up with devices and also had it powering a laptop.

I had the following items connected up:

Everything worked flawlessly without any issues. When I am on the road and need to back up material to a laptop, hubs like this work really well. It allows me to connect multiple hard drives, a media card reader, and power the laptop. The only real downside to using hubs that aren’t bus-powered is you need to have access to mains power to use them.

I also did some speed tests on the connected drives and all of the drives were working at the speeds I was expecting to see.

The only real downside to docks is you can certainly end up with a spaghetti mess of cables and connected devices. A lot of peripheral devices these days come with very short cables and that doesn’t help when you are trying to connect devices up to a dock.

While docks add a lot of connectivity, the caveat is that they aren’t going to lead to an aesthetically pleasing setup on your desk if you like to be neat and orderly.

Direct competition comes in the form of the CalDigit Thunderbolt 4 Element Hub and the OWC Thunderbolt Hub.

A lot of hubs look very, very similar, and often they all have their ports in the same spots.

The Echo 5 Thunderbolt 4 Hub works as advertised. Despite being relatively compact you need to factor in the size and weight of the power supply. It is well made, and easy to use and would be a good option for anyone using a Mac laptop that has limited ports, or someone who wants to enhance the connectivity of their desktop.