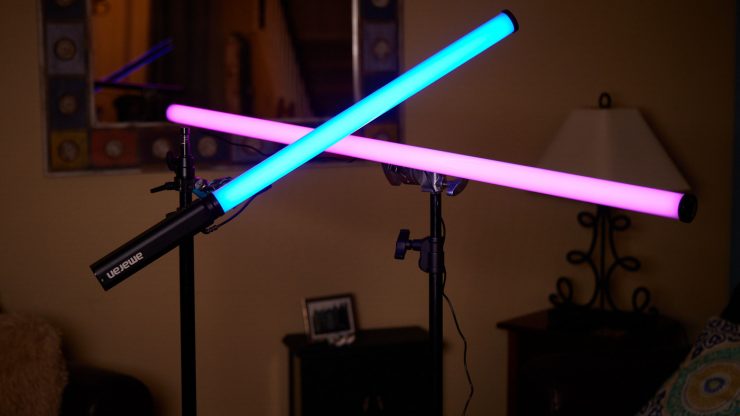 Tube lights have become relatively popular over the years, and they have also become more affordable. I feel they have a place in productions but not so much for essential lighting such as a key light. They will work if you use several and some diffusion, but other options, such as a softbox with a COB fixture, make more sense. Tube lights do work well for hair and backlights or side fill. That is where they shine.

The other use for tube lights is as practicals or set design. When used this way, you can create fun lighting looks with multiple colors and patterns. The amount of control is dependent on the fixture’s capabilities. The 2′ T2c and 4′ T4c can be controlled with the Sidus link and with a new USB-C DMX input.
The T2c and T4c cannot output multiple colors at the same time. The colors are saturated with one color throughout the tube.

The case fits all the goodies neatly and gives some protection from scratches with the soft case. As with most cases when the cables are released from packing, they don’t have the same compactness as they do when shipped, but it all packs up reasonably well.

The T2c and T4c can be powered with an included AC power supply, and an included 77Wh battery grip that securely locks into place on the end of the tube. The approximate run time of the 2′ T2c at full output is approximately 4 hours. With 4′ T4c, it is 1 hour 40 minutes. Runtime varies depending on the output and color settings. It’s great to have an included battery option as opposed to an internal but to charge the battery, you have to use the AC adapter, so you can’t charge and use the light simultaneously.

I like the battery grip. It twists and locks into place and plugs into the side of the lamp. The cable is just long enough to not get in the way and snag on something. The end of the cable that goes into the battery is reinforced, and the plug is angled to keep it slim. One downside is that the battery adds substantial weight to the end of the tube. It comes in at 625 g /1.64 lb. The T2c alone is 510 g / 1.2 lb.

When using the AC power supply, the cable is thin and light, but unfortunately, it doesn’t lock, so a tug on the cable could unplug the tube light. This can be seen in two ways. If it did lock and someone trips on the cable, the whole fixture could go down as any fixture would. I feel a locking cable would be better when using several together. If they are out of reach and unplug, you have to get a ladder or lower the fixture to plug it back in.

The menu system is basic and works similarly to an MC light with a duel purpose scroll wheel/push button. You select the option and push the wheel to make changes. Very simple. The LED screen is small, and the text is also, but it is bright. I prefer the menu on the back as some tubes put the menu on the front, and when the light is on, it’s blowing your eyeballs out, making it difficult to see the menu. I highly recommend using the Sidus Link. So much better for controlling the T2c and T4c.

For DMX, it uses a USB-C connection that requires a 5-Pin DMX512 In & Out Adapter Cable that is sold separately.

The best way to control the T2c and T4c is with the Sidus Link app. It’s free for iPhone and will give you all the options for the fixture. Using the on-board menu is a bit difficult when the tube is mounted especially if it’s tight and you can’t get behind the fixture. With the Sidus Link, I can make all the changes and more.

As you can see, the output varies quite dramatically depending on the color you have chosen. This is something you need to be aware of.

Let’s now have a look at the Kelvin color temperature accuracy and color rending scores for both lights. Both the T2c and T4c use the same type of LEDs.

The extended CRI scores are solid, and the Kelvin color temperature accuracy was also pretty good. The light didn’t have any big green or magenta shifts.

LEDs these days are really good. Color is becoming a nonissue, making Erik a very happy boy. If you are using these fixtures with other lights that might have a color shift, you can adjust them to match with the +/- G/M settings. This is an advantage RGB lights have over bi-color.

One of the issues with tubes lights is mounting them. The amaran T2c and T4c models have a Nato rail that goes down the back of the lamp and several sets of taps for mounting.

The 3/8 16″ is also an Arri Accessory tap with two-pin positions on each side, preventing twisting. A 1/4 20″ is on both sides of the 3/8 16″ taps. I like this design a lot. You have several options to mount the tubes without using a proprietary system, but amaran stated they will have mounting systems for the tube lights soon. The simplest would be the Nato option, as you can slide the clamp in any position that works for you.

On each end are 3/8 16″ taps, and the battery also has a 3/8 16″ tap. So amaran really solved the mounting problem with simple solutions and will have more soon. Nice work! I would like to see some NATO baby pins. That would work great with grip heads, plus no twisting loose!

For now, you can get creative with some off-the-shelf options like the Kondor Blue Cine Magic Arm with ball heads that can be swapped out. The Arri Accesary and Nato clamp work great. I like these because they don’t twist. Another option is adding a clamp to the end.

My favorite is the NATO clamp, and I would take the version with a 3/8 16″ tap and use some Loctite to make it permanent so it won’t twist loose. It’s fairly cheap to make, and it can be used with a grip head. Again, you have a lot of options. You just have to get creative and adapt to the situation you want to use the tube lights for.

This is a clever idea. The Magnetic Trash Can Mount. Just kidding.

These Film Devices MG-88 rubber-based magnets are handy and also can be used with different mounts since they have 1/4 20″ and 3/8 16″ taps. If you like grip gear, I think you can find a way to mount these tubes for your needs.

amaran has Tube Grids for the T2c and T4c tube lights. These will be available soon. They are designed to focus the light and prevent spill. Very handy.

There are already a ton of LED tube lights out in the market from companies such as Nanlite, Quasar Science, Astera, Vibesta, etc.

The closest direct competition arguably comes from Nanlite, which makes a range of PavoTubes that are priced around the same amount as these new amaran offerings. Below you can see some of those options and their prices:

The amaran T2c and T4c are priced competitively, and if you use other amaran and Aputure lights, they will work well together with the Sidus link. I think that alone makes them a compelling option to add a few to the kit. Integration is nice, and changing the settings remotely is excellent. Once you get used to it, you miss the simplicity and quickness when using other products that don’t offer a solid app.

When it comes to tube lights, one usually isn’t enough, so the cost to get several will add up quickly, plus the rigging needed to use them. For small applications like backlights or just fill, it’s nice to have a few around. The battery option is also nice. It does add weight, but I think it’s not too bad.

There are many other options out there in the same price range with similar features, so it boils down to the ease of use for me. The T2 and T4 tube lights don’t have the ability to animate the LED’s colors as you see on Quasar Science tubes. The T2c and T4c are solid tube lights with an excellent mounting system in place especially when they release their own accessories.