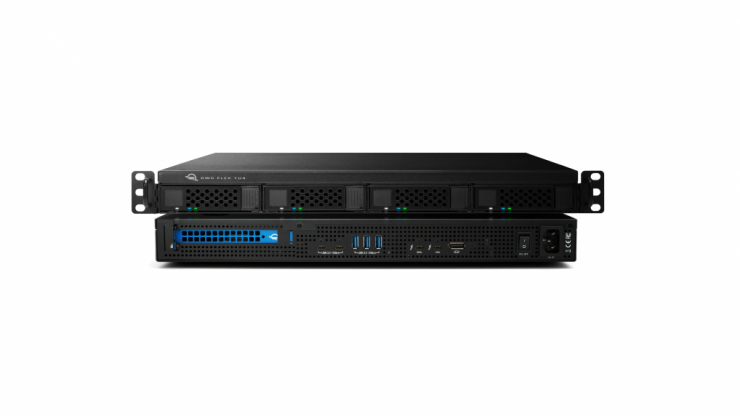 You can use a mix of 2.5″ or 3.5″ SATA/SAS and U.2/M.2 NVMe drives in the hot-swappable drive bays. You can also connect and charge mobile devices with Thunderbolt and USB ports. You also have the ability to add an audio/video capture, 10Gb Ethernet networking, SSD storage, hardware RAID card, or I/O card to the PCIe slot.

If you are not familiar with U.2 NVMe drives, they are specifically designed to maximize the PCIe bus, and when combined with Thunderbolt, you can get up to 2750MB/s real-world transfer speeds. Whether you use your rackmount setup to complete massive backups faster, stream content during a live performance, edit large format video, or run high transactional and complex calculation applications, you can do it with the Flex 1U4.

The OWC Flex 1U4 fits into the OWC U.2 ecosystem, so you can move and share data quickly and easily. It allows you to swap out and ship a project from field to post in video production workflows. You can also move back up data to an offline colocation for backup workflows.

The OWC Flex 1U4 drive array comes with SoftRAID XT, the most powerful, intuitive RAID management software on the market for macOS and Windows. SoftRAID’s RAID creation and management technology have been finely tuned to provide rock-solid protection of your data and optimize drive performance. It is packed with features like multiple RAID options, validation and verification of drives, and predictive disk failure with SoftRAID Monitor. SoftRAID provides a level of storage performance that you can’t get with hardware RAID and is ideal for anyone who needs to store safely and massive backup amounts of data.

The OWC Flex 1U4 is available now on Macsales.com with solutions starting at $1,899 USD.