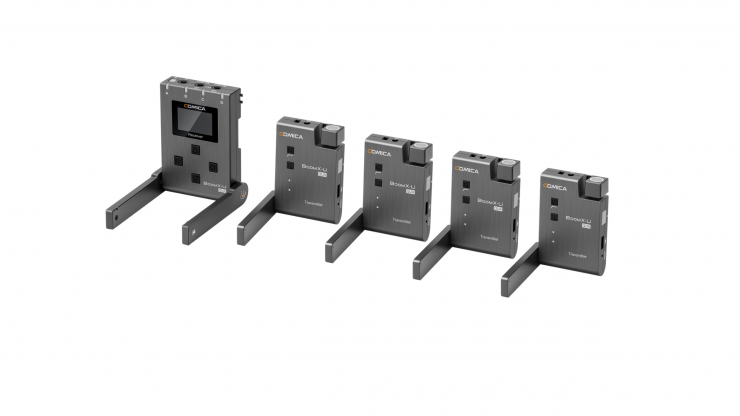 The BoomX-U QUA looks like an interesting product if you are on a budget.

The BoomX-U QUA works on UHF frequencies. You can choose from 24 Selectable UHF Channel. The claimed operating distance is 120m / 394′ and the battery life is stated at being 6.5 hours.

The BoomX-U QUA allows users to mix up to four audio tracks or use individual outputs. Here is where it gets a little confusing as Comix Audio doesn’t specifically list or state how this exactly works.

I am not sure why anyone would want to mix four channels of audio into a single track.

The whole idea of having a four-channel system is so that you can have four different audio sources going to a single RX unit that can then be outputted and recorded as separate individual tracks. The TX unit has two 3.5mm outputs that are marked A/B and C/D. What is slightly odd is that the kit comes with a 3.5mm TRS to 3.5mm TRS cable and a 3.5mm TRS to a single XLR cable. These cables won’t give you the ability to be able to output four individual tracks. To record four individual tracks you would need to be outputting to a mixer/recorder, or audio interface/camera that could accept a 3.5mm stereo source as well as two XLR inputs. You would also need a 3.5mm TRS to dual XLR splitter cable which isn’t included.

Comica Audio also states that you can use one TX unit and have it sent to multiple RX units if they are all on the same channel.

The BoomX-U QUA dual antennas can be folded down180 degrees for compact travel.

As I previously mentioned, the battery life of the BoomX-U QUA is 6.5 hours, however, you can power it externally via a USB power bank.

You can use the built-in microphone on the RX units or attach the included lavalier microphone which features a locking connector.

The TX units come with belt clips and the RX unit features a removable clip that has a cold shoe attachment on it.