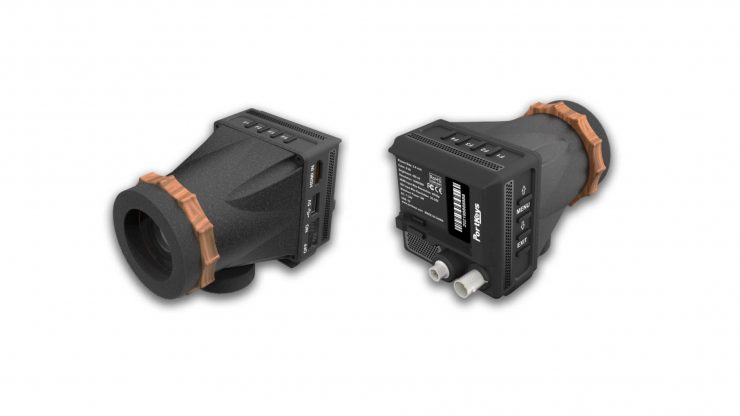 This is not the first time Portkeys has made an EVF with SDI capabilities. they already have the OEYE 4K 3G-SDI/HDMI EVF with RED Camera Menu Control. However, the new LEYE SDI HD EVF is a much more affordable option.

The EVF has a resolution of 1440 x 900, and it is an 8-bit display with a claimed contrast ratio of 1100:1 and 450nits of brightness. It comes with a Round Sponge Eye Mask and a Red Oak Diopter Swivel with an adjustment range of +8D~-3D.

The LEYE SDI HD EVF not only features a single 3G-SDI input and an HDMI input as well.

The LEYE SDI HD EVF features a passive heatsink vent, and Portkeys claims that it has better heat dissipation performance than the original LEYE.

The EFV can be powered via the self-locking 4 pin Aviation power connector or a Canon LP battery.

Portkeys gives you a 4-pin to D-tap power cable with the EVF.

Other viewing assist tools include:

The biggest issue with third-party EVFs is how to mount them. This can be a difficult task and it is often hard to get them positioned in the right place for easy use.

There is not a lot of competition when it comes to after-market EVFs that can work with any camera. The only real competition comes in the form of the Zacuto Gratical Eye Micro OLED EVF which retails for $1,450 USD.