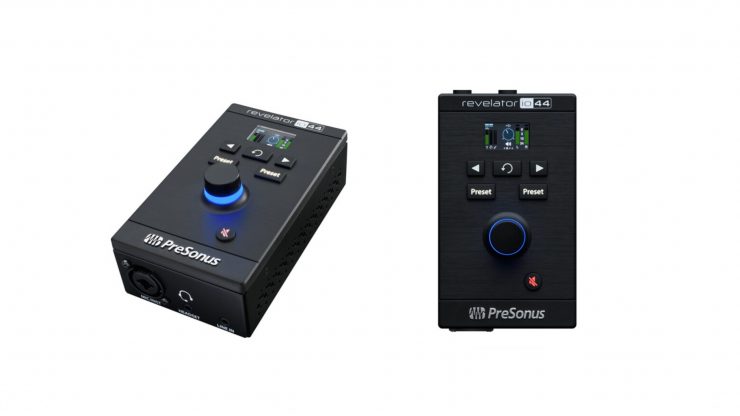 The PreSonus Revelator io44 Ultracompact 4×2 USB Type-C Audio Interface is a portable USB Type-C audio interface with a single XMAX-L mic preamp (with +48V phantom power). It was designed for both recording and streaming.

The Revelator io44 features an onboard DSP, loopback channels, all in a highly portable and compact form factor. The USB Type-C audio interface blends studio-quality, sonic performance, and ease of use, which makes it suitable for podcasters, live streamers, content creators, and musicians. It also comes with a software package that includes a DAW, a slew of virtual instruments, plug-in effects, loops, samples, etc.

The single XMAX-L preamp and 24-bit / 96 kHz converters are claimed to deliver clarity and natural tonality when used with microphones or electric guitars. A separate mini-jack input accommodates a line-level source such as a DJ mixer. There are also two loopback channels and an integrated mixer to pipe in backing tracks or to call in a guest, and feed independent mixes to the main and headphone outputs.

The Revelator io44’s loopback mixer makes it easy to add backing tracks to your livestream performance or conference or add in a Zoom caller to your podcast. With two dedicated stereo channels just for loopback audio on both macOS and Windows, you can mix and record the audio from two different applications along with your Revelator io44 inputs, all at the same time. An automatic output limiter prevents your stream from distorting.

There are also effects that let you emulate concert halls, AM radio, etc.

The Revelator io44 also features balanced 1/4″ main outputs for your speakers and a high-powered 3.5mm headphone output that works with TRS headphones as well as TRRS headsets.

PreSonus has included high-resolution input and output metering on the Revelator io44, allowing you to keep an eye on your input and mix levels when you’re recording by yourself. Wireless remote control can be done via UC Surface for iPadOS, Windows, and Android devices.

Regardless of whether you’re using a macOS or Windows computer, you can create custom mixes of your inputs and your applications and monitor them all at near-zero latency, so you can stream and record simultaneously.