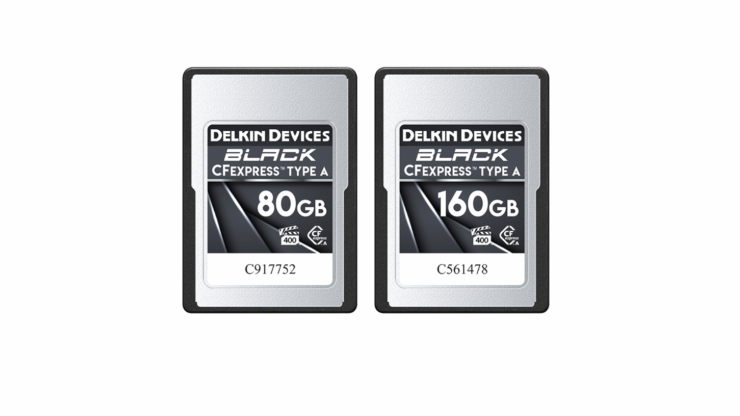 Delkin has announced a new lineup of BLACK CFexpres Type A cards that the company claims have a maximum recording speed of up to 790 MB/s and read speeds of up to 880 MB/s.

Delkin states that these new BLACK cards are capable of recording UHD 8K @ 30fps (400 Mbps) in the Sony a1. They also support RAW continuous-burst shooting.

The biggest problem with CFexpress Type A cards is the low capacities they are available in. The new BLACK CFexpres Type A cards are only available in capacities of 80GB and 160GB. a 160GB card only allows you to record 40 minutes of UHD 8K @30p (400Mbps). The highest capacity cards on the market are only 160GB.

Delkin claims that every BLACK CFexpress Type A memory card has undergone extensive testing to ensure full functionality and performance in cameras including the Sony a1, a7S III, a7 IV, FX3 & FX6.

Delkin offers a Lifetime Warranty policy, as well as a unique built-in insurance policy for their BLACK memory cards, known as the 48-Hour Replacement Guarantee. Delkin will replace any non-working BLACK card within 48 hours or less (not including weekends – in the US and UK), prior to receiving the non-working card. Cards can also be replaced over-the-counter at any authorized Delkin BLACK reseller.

I couldn’t find any information on pricing or availability for these cards, but I will update the article once I do.