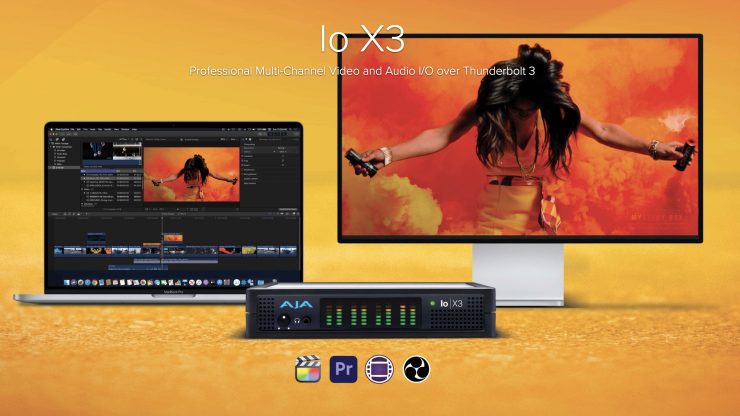 The AJA Io X3 is essentially a 2K/HD/SD 3G-SDI bi-directional interface box that features two loop through Thunderbolt 3 ports. It allows you to work with up to 60p HD/2K signals or files and it features support for all major NLE applications as well as other video applications such as OBS Studio, vMix and Telestream Wirecast.

The Io X3 provides a lot of versatility when it comes to connectivity for working with SD/HD/2K video pipelines. Dual Thunderbolt 3 ports provide host connectivity to a laptop or desktop PC or Mac, with the second port for loop through to other Thunderbolt devices. RS-422 is included for machine control of external devices so they can be synchronized for editing. Analog audio is offered via a DB-25 port, with all 8-channels configurable to be in or out. HDMI in and out ports allow for monitoring or video input sources to be accessed, including HDR and SDR video. Reference input connects the Io X3 to any master clock source alongside LTC input and output for timecode. Four bidirectional 3G-SDI ports can be configured as multi-channel inputs or outputs. Power is supplied via 4-pin XLR with either the included AC adapter or battery power

As previously mentioned, the Io X3 Plus provides two Thunderbolt 3 ports. Thunderbolt 3 doubles the speed of the previous Thunderbolt 2 standard with up to 40 Gps of throughput and utilizes the universal USB-C connection standard so you can connect over a single cable to Mac and PC workstations and laptops.

The Io X3 provides support for 2K and HD HDR pipelines to HDMI and SDI compatible displays in software v16.2 with HLG and HDR10 support with HDR Infoframe metadata, in accordance with HDMI 2.0a/CTA-861.3 and HD.

AJA Control Room software and Io X3 adds support for HDR metadata capture from an incoming SDI or HDMI signal. The captured .mov video file will have embedded HDR metadata, allowing the file to be played back at its intended dynamic range.

AJA Control Room software and Io X3 Plus also provides HDR Auto Playback Detection. Embedded HDR metadata in a recorded .mov file is read and used to automatically set the HDR format on the monitor(s) connected to the HDMI and/or SDI outputs.

Support for file-based .mov HDR outputs with metadata from Adobe Premiere Pro / Adobe Media Encoder HDR files is also available. Screening those rendered outputs is a simple and high-quality experience with AJA Control Room. Every frame is presented in its full-quality, at the timing intended, and with the proper HDR format set correctly and automatically.

The Io X3 works with all major NLE applications, including Apple Final Cut Pro, Avid Media Composer and Adobe Premiere. The Io X3 sits at the center of the NLE workflow, connected directly to the host laptop via super fast Thunderbolt 3. The NLE software is running on the host laptop, with the output of the time line being shown via both the HDMI port and the 3G-SDI port simultaneously, with support for HDR and SDR monitoring. The analog audio jack on the front of the unit provides headphone monitoring, whilst at the same time a standard Tascam DB-25 loom connects an analog mixer and microphone to the workflow, with the front panel VU meters responding to the independent channel levels. An AJA Ki Pro Ultra 12G is connected for real-time recording of the NLE output to Apple ProRes or Avid DNxHD for archive or hand-off. Whether editing promos, news footage, sports, long-form content or any other demanding video environment content.

The Io X3 offers multi-channel I/O, and the HDMI output port can display all of these sources to one display. Io X3 is fully compatible with OBS Studio software with multiview output offered for clear monitoring of incoming or outgoing video via the convenient HDMI output. OBS Studio can be configured with Io X3 to make monitoring easy, all from a single I/O device.