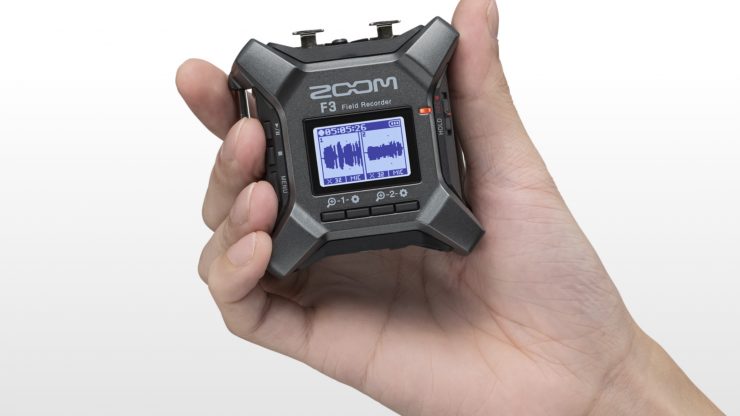 ZOOM has announced the F3 professional field recorder. It is equipped with two XLR balanced inputs and it can record 32-bit float in the WAV format.

The F3 is equipped with two AD converters (dual AD converters) for low gain and high gain, and it is claimed to achieve a high S/N ratio when capturing sound in both quiet and loud environments. The input signal can be recorded in a 32-bit float WAV format. 32-bit float is handy in certain situations where the sound levels can suddenly increase without warning or when you need to set and forget your recorder and have no way of monitoring or adjusting the levels.

The ZOOM F3 has been designed to be palm-sized and compact. It features a robust housing and it can be attached to a boom pole with Velcro.

The pocket-sized recorder has a headphone out and a line out and it can be powered by two AA batteries, an optional AC adapter, or a USB powerbank. ZOOM claims that the battery life when using AA batteries is up to 8 hours.

It records to microSDHC / microSDXC cards with a capacity of up to 1TB.

You can remote control the F3 by using an Android / iOS app and Bluetooth.

There is timecode, however, it is only compatible with Timecode Systems UltraSync Blue and the optional BTA-1 Bluetooth adapter.

There is currently no indication about pricing as this product has just been announced in Japan. It is scheduled to start shipping at the end of February.