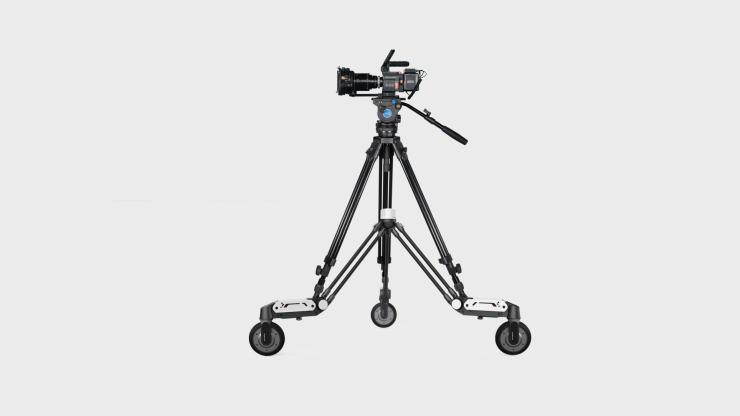 I have seen some interesting and strange products over the years, but the Rover Camera Dolly has to be right up there at the top of the list.

The Rover Camera Dolly is a so-called all-terrain camera dolly that features a built-in stabilization system and it is made by Snoppa, who is a Chinese company that makes entry-level gimbals for smartphones and small-sized cameras.

Above are the only two videos I could find showing the product.

Snoppa is claiming that the Rover Camera Dolly can be moved manually or automatically along a preset path over a variety of terrains.

It has a claimed payload capacity of 15kg / 33 lbs. What you need to take into account is that you have to use a tripod with this product and if you plan on using a tripod that is suitable for mid to larger-sized digital cinema cameras, then you the weight will quickly add up. What also concerns me is that there doesn’t seem to be any locking mechanism for where the tripod attaches to the Rover.

The Rover also comes with a monopod that you can use with smaller sized cameras if need be.

I don’t think I would personally be too keen placing an expensive camera package on this device and using it on rough terrain.

It also features a series of control interfaces and an image transmission module. This module features an HDMI IN, SDI IN, USC-C (for camera control), and an extension port for use with the remote controller.

You can operate the Rover via an app, through a remote control unit, or via a pan handle.

You can not only control the dolly remotely but also certain cameras as well.

So, how does it work?

The Rover camera Dolly utilizes an active dampening system. Each wheel has its own independent gyroscopic sensor, hall sensor, and accelerometer. These work together to send information to a brushless motor which then makes adjustments. These adjustments are claimed to be able to be done in less than 50 nanoseconds.

Each wheel on the Snoppa Camera Dolly is also equipped with its own steering motor, so all three wheels are able to work independently of each other. This allows it to be able to turn 360 degrees.

Bu using an adaptive algorithm, it is claimed that the Rover’s speed can be precisely controlled.

Snoppa states that the Rover camera Dolly’s top speed is 18.6 mph / 30kph which is pretty fast.

There are various different modes for operation of the Rover:

In ORTHO mode you can dolly in or out, or move left or right.

In Free mode, you can move the Rover in any direction you like.

In ARC mode you can get the Rover to move in a full circle or a semi-circle around an object or subject.

In Pre-programmed mode, you can define a movement template and have the Rover repeat it.

In Lock mode the Rover will move, but the camera direction will always remain the same. This is essentially like a parallax mode on a slider or dolly.

In Target mode, if you are shooting a fixed subject that doesn’t move, the Rover and the direction of the camera will always track that subject.

Snoppa has also included a clever way of being able to manually walk the Rover through a scene and along the way it will record and memorize the route. That way you can take it back to the starting point and it will be able to do repeatable moves along a complex path.

You can also use the Rover to create a moving timelapse or hyperlapse.

What is it made out of?

The Rover camera Dolly is mostly made out of carbon fiber and aluminum.

The Rover Camera Dolly utilizes a dual battery system that operates in parallel. The batteries are also claimed to be flight safe according to Snoppa, however, the specifications page lists the batteries as having a capacity of 216Wh.

You can sign up to get an early bird discount on the Rover Camera Dolly. The early bird price is $2,399 USD and the normal retail price will be $3,599 USD. Now, when you send in your email you can make a reservation by paying $9.90 USD and that is also claimed to get you another $200 USD off the price.

Even though it doesn’t say anything on their website, the Rover Camera Dolly is going to be launched on Indiegogo.

While this looks like an interesting product I have my doubts as to how well it will actually perform. I think calling it all-terrain is a little bit misleading because this is only going to work on reasonably flat surfaces and it isn’t going to be able to be used on inclines or hills.

All of the images on the website only show small-sized cameras with lightweight tripods, there aren’t any actual pictures where a medium or large-sized digital cinema camera with a decent tripod is being used. There isn’t a single video on the website showing the product working. You have to go to YouTube to find anything, and even then, there is not a lot of footage from the actual camera being used on the Rover Dolly.

What do you think about the Rover Camera Dolly? Is it a product that interests you? Let us know in the comments section below.