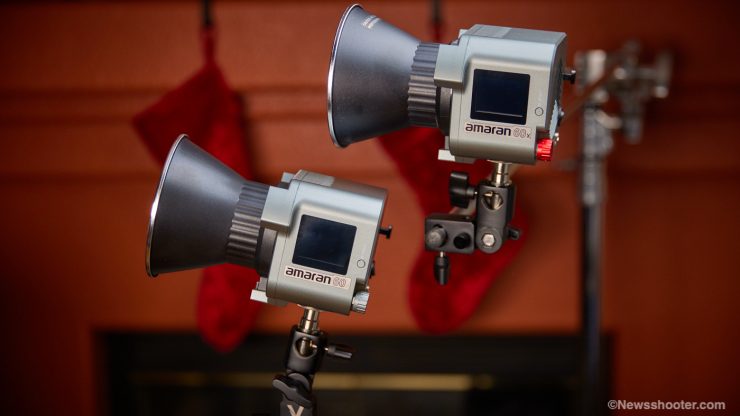 Aputure has been focusing on their current lighting products with better build quality and higher outputs, such as the NOVA P600c and Light Storm 1200d Pro.

The amaran line is designed for entry-level productions or someone who wants to own gear at a more affordable price. The build quality will be less robust than the Aputure Light Storm series, but the new COB 60d and 60x is very compact and light, which looks like a good option for travel.

Both fixtures have 65 watts of output with a COB (Chip On Board) LED cluster. Without reflector or mount, the fixture only weighs 675g / 1.49lbs. With the power supply and mounting pin added, it comes in at 2.060kg / 4.54lbs. The fixture doesn’t have a yoke. Instead, it uses a 1⁄4-20″ Mounting Pin with Stand Adapter.

What’s Included In Each Kit

The kit comes in a firm styrofoam case that holds all the accessories. The downside here is you have to assemble the light to use it as it doesn’t have a yolk. I would replace the case with a bag/case that allows the mounting pin and mounting hardware adapter to be attached. This would make grabbing the COB 60 faster on set to get it in place.

What feels like a first the amaran 60d/60x lights don’t include a remote; however, the lights are fully compatible with the Sidus Link app.
Operating the light is very simple. It has one dial that is also a push-button. To change from output to kelvin with the COB 60x, you push and hold the dial, and it switches to Kelvin. When in output mode, a quick press of the dial will boost the light output in 20% increments.

Both fixtures have 8 Lighting FX: Paparazzi, Fireworks, Lightning, Faulty Bulb, TV, Pulse, Strobe, and Explosion. These are accessed with the Sidus Link app. There is no onboard menu system to access special effects.

In addition to the included AC Power supply, the fixtures can be powered using the included Dual Sony NP-F Battery Plate, or a D-Tap Battery (cable sold separately), which attaches to the V-Mount plate located on the side of the light. No Gold Mount option is available, probably due to the mounting plate size it requires.

Both fixtures have a maximum power consumption of 76W.
For D-Tap, it requires 12-16.8 volts. This cable isn’t included but can be easily purchased from 3rd party suppliers. I have this one from Alvin’s Cables, and it works great. When shopping for the D-Tap cable, make sure it has a Locking DC 5.5×2.1mm DC end for the power input to the COB 60.

You will need to use a battery that can sustain a maximum power consumption of 76W at 100% output. This will make it a little tricky when using both the NP battery plate and V-Lock batteries. One main issue with D-Tap is it doesn’t supply the full power potential of a battery. It’s usually limited to 12 volts. I tested a CORE SWX NEO 9 Mini 98-watt-hour battery and got 37 minutes of run time at 100% output before the light would shut off. The battery reached 53% capacity. All batteries perform differently, and it’s good to know if you don’t have larger capacity batteries that can deliver continuous output with D-Tap, you won’t be able to run the light at full power throughout the batteries range.

When using NP-F batteries, 12-16.8V is also needed. The NP-F battery plate is included and has a fixed cable on the base with a barrel connector on the other end that goes into the light. The same rules apply with the NP battery plate as using D-Tap with V-Locks.

The COB 60 has a fan on the back that kicks on when the light is turned on. It’s not loud, and I found it usable in quiet environments. I think the COB being more exposed helps to keep it cool. Around the COB are fins to assist in cooling.

Like many amaran lights, the COB 60x and 60c have a 1/4 20″ tap to mount a light stand using a Mounting Pin with Stand Adapter. The pin screws into the base of the light and mounts into the adapter. I’m not a fan of this setup.

I said it before, and I’ll say it again. I know why amaran uses these types of mounts because they are inexpensive, which will keep the cost down. The mount also has an ARRI accessory-type mount with two slots for pins that will prevent twisting lose. I like this as you can use an arm to mount the light.

The amaran 60d/60x comes with a Hyper Reflector (Mini) that Aputure states are specially designed with a 15° Beam Angle. This is a tight beam angle, and I would like to see an optional version that is much wider. The bare bulb without the reflector has a 120° beam angle.

The new mini reflector being much smaller has a new design with three extended arms to attach to the Bownes Mount. Hopefully, other versions with a wider spread will be available.

A good option is to get the Bowens Mount Standard Reflector, as it has a much smoother spread with a minimal hot spot. Other 3rd party Bowens reflectors would also work. Look for ones without a pattern that is rough without a shiny finish for broader beam angles.

You can use the COB 60 without a reflector and get a very broad light, but it’s going to spill a lot. Again a 50-degree reflector would be great to have.

Since the amaran 60x/60d has a full-size Bowens Mount, the fixtures are compatible with a large selection of modifiers on the market, including the Aputure Light Dome SE, Light Dome Mini II, Aputure Lantern, and even the 12 x 14″ LS 60 Softbox.

Don’t expect the included mounting system to hold anything more significant than the Light Dome SE, as it’s not robust enough for the extra weight and length. The Light Dome SE at 35.5″ is an excellent option as it’s a good size for interviews and tight spaces. I’m sure other brand diffusers will work fine as well, so long as they are not over 35″ to play it safe.

Keep in mind the COB 60 series is a 75 watt light, and large diffusion or softboxes will knock the output down more. I do think it has enough punch to use for nice key light.

TIP: When using the Light Dome SE, don’t attach the inner baffle as the COB 60 bare has 150-degree spread and fills the Light Dome SE nice and even without it. It will also increase the output, and you might need it since the light is rated at 65 watts.

Please keep in mind that the Hyper Reflector (Mini) has a very narrow 15° beam angle that will significantly boost the lux readings. The sample image from two meters shows that the hot spot is approximately 1.5 feet or 0.45 meters wide.

The Spectral Distribution is nice, with no spikes. The blue spike is normal for a daylight fixture.

The kelvin test came in at 5331K. This is a little low, however, not many lights hit the 5600K mark perfectly. There is minimal color pollution. Basically, these scores are very good and won’t give you issues. It says a lot about LED lights today as the affordable ones perform very well.

Please keep in mind that the Hyper Reflector (Mini) has a very narrow 15° beam angle that will significantly boost the lux readings. As in the sample image from two meters, the hot spot is approximately 1.5 feet or 0.45 meters wide.

As with most bi-color lights, output decreases for the flexibility of having the 2700K to 6500K option. Below are the stated output readings provided by Aputure.

Overall the COB 60x performs very well. The only part of the tests that show a consistent issue is the Kelvin temperatures are all skewing warmer. For a budget fixture, the amaran COB 60x performs.

The amaran COB 60 series are good lights at a great price. If you have a need for a lower output compact fixture that, yes, does operate with batteries, the light ticks all those boxes. I can see people exploiting the small size and using different types of Bowens mount modifiers to achieve the look they want.

While I’m not a fan of the mounting system, it is fixable with other more robust adapters, but it will work just fine for the casual user.

The Hyper Reflector Mini beam angle is tighter than I like, but it does deliver if a concentrated light source is needed. Again you can get a broader beam reflector for a fair price, or if you have a 120d, that reflector works great with the COB 60 lights. I can also see umbrellas being an excellent alternative to the more expensive softbox options. You have a lot of different choices, from shoot-through or bounce types. They are very inexpensive and can get the job done with a shoestring budget.