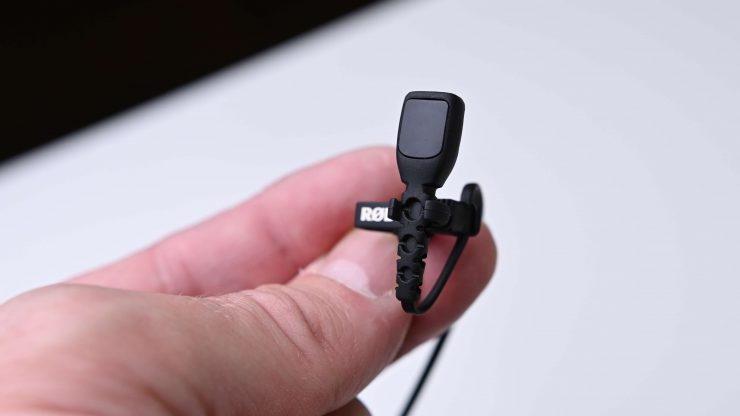 The RØDE Lavalier II is being presented as a premium lavalier microphone ideal for demanding audio and video applications. It features a new low-profile design and stated better sound quality.

I am looking at the RØDE Lavalier II as a professional working in the film and television industry. My review is being done specifically to reflect how I would use a lavalier microphone. I understand there are many different users in the vast video production and creator space, so I hope my opinions in this review will be helpful.

One of my issues with the original RØDELink Lavalier microphone was that the microphone capsule was very large and difficult to conceal. It was also hard to make it work with industry-standard third-party accessories.

RØDE has gone back to the drawing board with the Lavalier II, and it now features a new low-profile design. RØDE states that it uses a new capsule technology and a unique form factor.

Above, you can see the new Lavalier II next to the older Lavalier.

RØDE states this new form factor allows users to place the microphone flush against clothing and other mounting surfaces. The potential issue I see is that because the actual capsule is located on the front and not on top, concealing the microphone will probably mean you end up covering the capsule with clothing or skin. I will test this out later in the review.

The Lavalier II has a new mounting clip that is a lot smaller than the original, as well as a flat cable.

I am not sure why they put a very visible RØDE logo on the mic clip. There is no need to do this. Most professionals I know would not use a clip with a big branded logo on it. Yes, you could probably remove it with something like nail polish remover or put some black tape over the top of it, but you shouldn’t have to. Branding is important to companies, but I don’t want to see branding on a mic clip.

The Lavalier II is stated to deliver broadcast-grade sound suitable for a range of recording applications. It is also claimed to have a very flat frequency response with low noise performance. It utilizes an omnidirectional polar pattern which is very common for lavalier microphones. I will test the sound quality later on in the review.

Can be used with a wide variety of devices

The Lavalier II can be used with a wide variety of audio devices, including the RØDE Wireless GO II and the newly released AI-Micro. It features a 3.5mm locking connector for use with professional wireless microphone systems.

Even though the new Lavalier II features a locking connector, you can still use it with the RØDE Wireless GO II. It can be used with a wide array of devices and is probably one of its biggest selling points.

So how is the RØDE Lavalier II to use, and more importantly, is the sound quality good? Well, let’s find out.

You can also remove the locking nut from the Lavalier II and plug it straight into the Wireless GO II if you prefer. This does provide a more secure connection.

What I also like is that the physical height of the connector on the end of the Lavalier II is smaller than that of the original. This means it is easier to place on the back of someone’s belt or pants without having too much strain applied to the connector if someone sits down.

I would like a version with a right-angle connector as well, specifically for use with the Wireless GO II.

On the plus side, the cable is a lot thinner and lighter than the one used on the original Lavalier. This is undoubtedly a significant improvement.

The mic clip is easy to use, and the design is a big improvement over the original. You can clip the cable in so that everything is neat and tidy.

Most professionals don’t want microphones seen, and they prefer to hide them if at all possible. So, how easy is it to conceal the Lavalier II?

I would have liked to have seen RØDE include some sort of device to help conceal the Lavalier II. A lot of third-party companies make specific concealment devices for particular microphones.

The included windsock is solidly made but a little on the large side. It does fit securely.

Now that we have looked at usability, let’s see how the microphone actually performs. I will compare it directly to the original RØDE Lavalier and the RØDE Lavalier GO.

Above, you can listen to a test where I used various Lavalier microphones with the RØDE Wireless GO II system. I didn’t change the levels when recording, or in post, so you get an accurate baseline of how they compare. All the Lavalier microphones were placed in the same spot on the subject using their included mic clips. The tests were done in a normal room, similar to typical use.

From my testing, I found that the Lavalier II seems to be quite a bit more sensitive than the other two microphones. It certainly has more bass to it, but I think it picks up a little more of the room, possibly due to where the capsule is located. The original Lavalier has a different frequency response, and it is more tailored towards slightly higher frequencies. The Lavalier GO sounds pretty similar to the original Lavalier. What you prefer when it comes to the sound of a microphone can be a very personal preference. It is important to remember that you can alter the sound in post.

Hiding the Lavalier II in Clothing

You might want to conceal the lavalier microphone. This is a common practice when you don’t want to see a microphone. With this in mind, I did the same test as before, except the Lavalier microphones were placed in the same position underneath a t-shirt using Rycote Stickies. Please be aware that there are many ways to conceal microphones, and some methods work better than others depending on what Lavalier you are using and the clothing the talent is wearing. Again, I haven’t altered the recording level or changed it in post.

When concealed, the Lavalier II has a little more low end than the other two microphones, and I think it is picking up more of the room. I think this has a lot to do with its capsule placement and higher sensitivity. This is not necessarily a bad thing, but you should know it. It is also important to note that because the Lavalier II is more sensitive than the other two microphones, the amount of the room you are picking up won’t be as pronounced if you lowered the recording level down to match the other two microphones. I prefer a lavalier with a higher frequency response if I’m going to conceal it, as hiding a mic tends to lower the brightness due to the clothing.

While hiding a lav mic might not be a practice everyone does, it’s good to know how it performs if you want to use it in this manner.

I also did a test comparing the original Lavalier and the Lavalier II to see how the off-axis response was of both microphones.

I found that the off-axis response was certainly better using the Lavalier II. This makes it well suited to anyone demonstrating something where they need to constantly be turning their head.

The Lavalier II comes with a premium accessory kit. This includes a high-quality pop filter and mini furry windshield. There is also a compact mounting clip (including easy cable management slots) and a set of colored identification rings to keep track of microphones in multi-camera situations.

I think the RØDE Lavalier II is targeted at Vloggers and YouTubers who don’t need to hide microphones and predominantly work in controlled environments. It is also being targeted specifically at users of products such as the Wireless GO II.

The Lavalier II is going to work well for a certain type of user and it allows for a lot of flexibility because you can use it with a wide array of different devices. If you own a RØDE Wireless GO II system, this microphone will be a great option at a good price point.