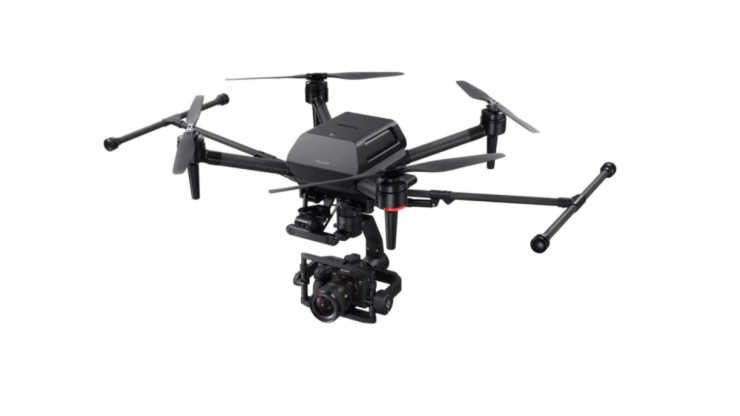 The Sony Airpeak S1 is finally available to order. The Airpeak S1 was first announced way back at CES 2021 in January and it has taken a long time to come to market. Sony claims that the S1 is the world’s smallest drone that can be equipped with a full-size mirrorless interchangeable-lens Alpha camera. The S1 is the first drone in Sony’s new Airpeak series, hinting that more drones are likely to come in the future.

The Airpeak S1 will be slightly cheaper than a DJI Inspire 2 Advanced Kit with Zenmuse X7 Gimbal & 16mm/2.8 ASPH ND Lens that retails for $9,399 USD, however, it is quite a lot more than a DJI Mavic 3 Cine. You need to clearly know that the Airpeak S1 doesn’t come with a gimbal, camera, lens, or a travel case. Not including the gimbal as standard is a real head-scratcher.

If you want a gimbal you need to buy the Sony Airpeak S1 Professional Drone & Gremsy Gimbal T3 Kit which will set you back a whopping $11,199.98 USD.

For that money you get the following:

Additional accessories like an Airpeak S1 battery cost $229 USD. A spare set of propellors is $199 USD.

Sony’s Airpeak brand is a new business that is targeted squarely at professional photography and video production. It is interesting to see Sony try and tackle the highly competitive drone sector, especially given DJI’s dominance.

Sony has also said that they are looking at expanding the Airpeak platform into the industrial and agricultural sectors moving forward.

Above you can watch Sony’s quick intro to Airpeak at CES 2021.

Above you can see footage that was shot in Iriomote Island in Japan using a Sony a7S III and a 35mm FE14mm F1.8GM lens.

Above you can see a BTS video of the VISION-S road test in Austria, shot by Airpeak.

The Airpeak S1 is certainly fast and it can operate in fairly high winds, however, the maximum flight time with a payload is just 12 minutes.

So how do the Airpeak S1’s acceleration, max. speed and flight time compare to the DJI Inspire 2?

The flight time is less than half that of the Inspire 2. Why on earth Sony quotes the max. speed of the Airpeak S1 with no payload on and not with a payload baffles the mind.

The Airpeak S1 utilizes 17″ propellers and what Sony is referring to as lightweight, high performance, high power brushless motors. These motors were developed in-house by Sony.

Sony has a video showing the Airpeak undergoing wind resistance testing. The wind tunnel at Japan Aerospace Exploration Agency (JAXA) can generate an artificial airflow at a constant speed. Sony’s goal was to see how the drone would be affected by strong wind. They did this to work out what wind speed the drone could endure. Sony’s tests showed that the prototype could maintain stable flight up to around 20m/s. To put that figure in perspective, an average person would have trouble standing upright in wind speeds that high.

Perhaps the biggest benefit of the Airpeak S1 is that it can operate in pretty high winds and still remain stable. According to Sony, it will easily outperform the DJI Inspire 2 and even the Matrice in high wind conditions.

The Airpeak S1 has 5 stereo cameras and 2 IR range sensors on board. That means there are two cameras facing forward, down, left, right, and behind. The drone also uses Sony’s Vision Sensing Processor.

It also has what Sony is referring to as Surround Obstacle Braking.

The Airpeak S1 will have several automated flight modes.

Similar in size to a DJI Inspire 2

The Airpeak S1 isn’t a small, compact drone that has an in-built camera. It looks to have been designed as an in-between solution where a user wants better quality than what you get from a small-sized drone with a fixed lens/camera, but they don’t want to go to a much larger platform that can carry mid to large-sized digital cinema cameras.

The drone takes two quite large batteries to power it. Considering these two batteries only allow for a flight time of 12 minutes you are going to need a lot of them.

The Airpeak S1 can use the following cameras:

Even though Sony only lists these cameras, you can in fact use basically any Sony Alpha series camera. Sony also stated that you don’t have to use a Sony camera with the Airpeak S1, but it has been optimized to work with the Alpha platform. Sony hasn’t tested the drone with other non-Sony cameras. How a non-Sony camera would interface with the system is something we just don’t currently know.

As far as lenses are concerned, Sony states that any E-mount lens from 14-85mm can be used.

The camera connects to the gimbal through both HDMI and USB. The camera can’t be powered via the gimbal or drione. You need to use the internal battery inside your Alpha camera,

Sony states that Airpeak is the industry’s smallest class of drone that can be equipped with a Sony Alpha camera system.

Above you can see what the interface screen and controller for the system look like. The holder allows for a maximum of 178.5 mm making it compatible with smartphones and tablets. It also has an HDMI port for connecting to an external screen.

The gimbal being used on the drone is a Gremsy T3 that has been specifically designed for the Airpeak S1.

The drone does have a dual operation mode, so one person can fly the Airpeak S1 while another operator controls the camera.

The Airpeak Base integrated management web app allows you to utilize a flight planning editor, access a logbook viewer, as well as have a fleet manager section if you are running multiple drones.

You can also set up specific flight routes that are repeatable and make changes to max altitude, speed, etc.

“Return to Home (RTH)” will automatically activate if the battery is low or the signal is lost, bringing the aircraft safely back to the home point. And if the return route has restricted airspace or obstacles, the aircraft can automatically calculate a bypass route.

What do you think about the Airpeak S1? Would you buy one? Let us know in the comments section below.