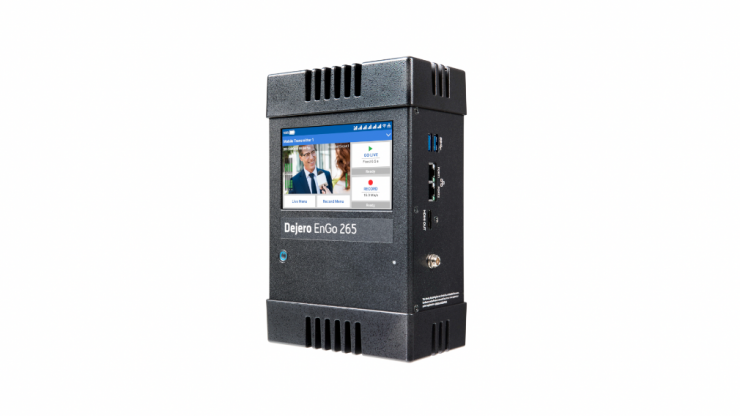 Dejero has announced its new EnGo 265 Mobile Transmitter that is being targeted squarely at news teams and live event broadcasters.

The EnGo 265 was built to specifically replace the EnGo 260. The new model bolsters security and provides even lower latency than the EnGo 260. Dejero claims the latency is as low as 0.5 seconds over bonded cellular connections. It also features a new ‘GateWay mode’ for wireless broadband internet connectivity and a modified backpack with a wired remote.

If you have ever used a Dejero you will know how simple and easy they are to operate. Once they are initially set up they are virtually plug and play.

The mobile transmitter also features high-efficiency antennas and the RF design is claimed to ensure ultra-reliable cellular reception in poor coverage and crowded areas, and while on the go.

In addition to AES256 encryption, the EnGo 265 includes a security-hardened Linux OS and a cryptoprocessor to authenticate the hardware.

GateWay mode combines live transmission and internet gateway capabilities into a single device. It aggregates available networks to maximize reliability and increase bandwidth, resulting in improved productivity of field crews by allowing them to do more on the go. In most newsgathering and remote production scenarios, this involves bonding cellular connections from multiple carriers, with the option to also tap into satellite connectivity when needed.

A significant algorithm enhancement further improves reliability in challenging environments. According to Dejero, other solutions require a wired connection to achieve sub-second latency.

With its integrated global modems, user-accessible SIMs, and an internal battery that’s aircraft carry-on compliant, the EnGo 265 is ideal for domestic and international travel.

For convenience, a wired remote now attaches to the modified EnGo transmitter backpack so that camera operators can easily start and stop live streams, and monitor status.