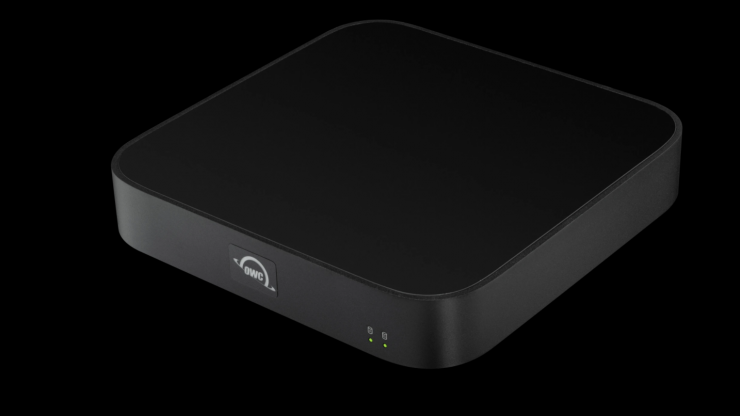 OWC has announced the ministack STX, which they are claiming is the world’s first Thunderbolt certified Thunderbolt 4 storage solution.

OWC has had a miniStack since 2005 and it has always been a good companion for the Mac mini. The new miniStack STX now features storage and Thunderbolt Xpansion.

The new miniStack STX features a universal SATA HDD/SSD bay and an NVMe M.2 PCIe SSD slot, that allows you can expand your mini’s storage capacity. Three Thunderbolt (USB-C) ports enable you to connect to a large array of Thunderbolt, USB, and future USB4 drives, displays, A/V mixers, cameras, and tablets; as well as desktop accessories like a keyboard, card reader, or mouse.

Even though the miniStack STX has been designed in the same form factor as the Mac Mini you can still use it with a MacBook, PC notebook and desktop machines, iPads, and Chromebooks.

The universal SATA drive bay holds a hard disk drive or SSD. When you need to support low latency instant access operations, the NVMe M.2 SSD slot can deliver the speed potential of modern flash drive technology by using a more direct path to a computer’s processor over PCIe.

With multiple drive configurations available, you can get up to 770MB/s of real-world data transfer speed. You can use the SATA drive for Time Machine or File History backups while working off the NVMe drive. The miniStack STX is great for multi-stream compressed 4K video editing, photography, audio, virtual machines, and everyday data tasks.

The miniStack STX starts from $299 USD and it is now available to pre-order.