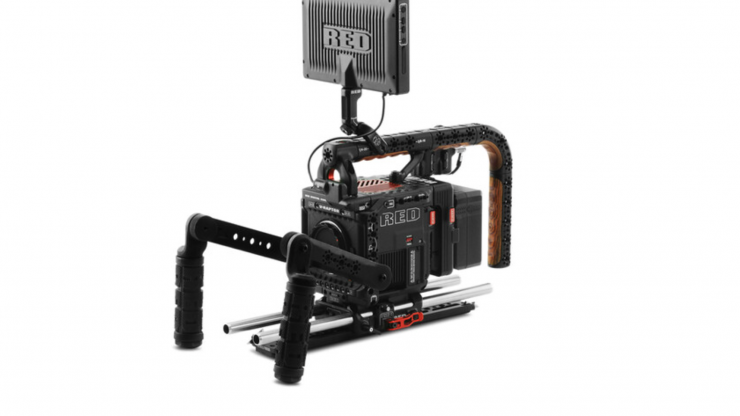 Creative Solutions and RED have announced the launch of the V-RAPTOR Camera System. RED and Creative Solutions have been in a multi-year collaboration to come up with these integrated and co-branded products that are sold as a kit.

The V-RAPTOR captures up to 8K VistaVision and 6K Super35 video, and it features an RF lens mount, dual 12G-SDI outputs, REDCODE Raw recording at high frame rates, 1080p streaming, 17+ stops of dynamic range, and phase-detection autofocus. The included batteries and AC adapter keep the camera powered, and the CFexpress card is designed specifically for the new line of DSMC3 cameras.

The top handle features multiple 1/4″-20 and 3/8″-16 threads for mounting additional accessories. The quick release platform pack features an Arca-type mounting plate that is compatible with battery plates and 15mm LWS rod systems, as well as the included expander blade. The expander blade adds functionality to the V-RAPTOR and provides Genlock BNC connector, a 5-pin timecode connector, a 3-pin Run/Stop trigger connector, and a 4-pin RED CTRL connector. The 5-pin to dual-XLR adapter allows you to add 3-pin XLR audio inputs to the camera while also providing 48V phantom power and mic/line input.

The RED DIGITAL CINEMA V-RAPTOR Production Pack Lite retails for $32,000 USD and it is available to pre-order.

Here is what you get in the V-RAPTOR Production Pack: