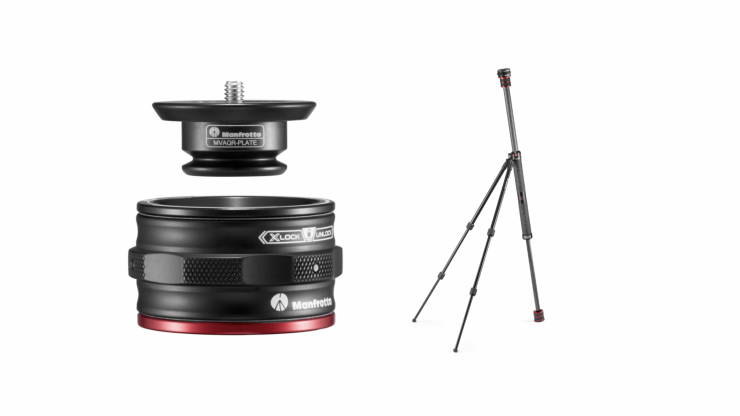 Manfrotto has announced the Move Quick Release System & Move Gim-Pod which are part of the new Move Ecosystem. The Move Ecosystem is a series of modular interconnectable parts and products that have been designed with versatility and convenience in mind.

The Move Ecosystem consists of:

Manfrotto’s Move Quick Release System. This consists of a lightweight base and plate system which you attach to your equipment so that you can transfer from one platform to another without having to stop to screw and unscrew parts.

By adding the bases to various support equipment, and the plate to their camera systems, users can quickly switch their cameras rigs from one piece of equipment to the next. The Move Quick Release System features a 360° range of motion so that it clicks automatically into place no matter the direction.

It also features Manfrotto’s new X LOCK system which is claimed to increases the rigidity of the entire kit where it is mounted through its twist locking mechanism. It can interconnect with most camera equipment and camera support thanks to a universal 3/8” thread connector and 1/4” thread adapter.

The Move Quick Release System is made out of an anodized aluminum and it weighs in at just 220g / 7.76oz. Manfrotto states that it will work with camera payloads of up to 20Kg / 44.09lb.

The Move Quick Release System allows you to couple Manfrotto tripods with sliders and different heads on top.

Above you can see various Manfrotto products that it will work with.

Other products such as Manfrotto’s Gimboom can be paired with the new Modular Gimbal 300XM in order to have a 2 meters long stabilized support with remote control capabilities that can be fully operated by a single user.

The 300XM Gimbal’s detachable modular construction including its stabilizing head and electronic controls can be separated. The gimbal head can also be adapted onto a completely separate support such as a tripod or slider if you needed to create a remotely operated shooting platform.

Gim-Pod is an accessory designed specifically for Manfrotto’s Gimboom. Essentially it is a two-legged tripod that you attach to the Gimboom so you can create a tripod/boom solution for the Gimboom.

This can also be paired with Manfrotto’s newly announced and upcoming Q6 Ball Head which features a sliding Arca-Swiss compatible top-locking mechanism.

Gim-Pod was designed as a fast-paced tool for content creators who want to do moving boom shots as well as static shots.

Gim-Pod features twist locking legs and it is made out of aluminum.

When it is collapsed down, the Gim-Pod’s length doesn’t exceed that of the Gimboom.

The Gim-Pod’s legs features a universal 3/8” thread connector so you can add external accessories such as monitors or audio equipment to the Gimboom. This Connector is also available as a stand-alone part.