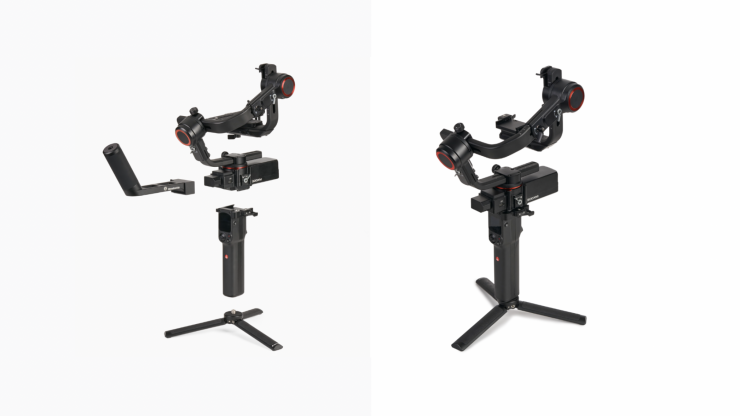 The Manfrotto Gimbal 300XM has been designed with modularity and versatility in mind. We are starting to see quite a few gimbals coming to market that can be broken down into smaller components so they can be used for various shooting applications.

Now, Manfrotto is stating that the Gimbal 300XM is the first modular stabilizer that has been designed to speed up workflows on set because of its modular construction. I would argue, that the DJI RS2 was the first gimbal that was designed to do exactly that.

Build it up or tear it down

The modular design of the Gimbal 300XM allows users to detach individual parts and readapt them to create different configurations based on their shooting requirements. The whole concept is that shooters can integrate their existing gear into a customized configuration that works for them.

As an example, you could detach the 300XM’s remote control handle and attaching it to the base of Manfrotto’s Gimboom. This allows users to extend their stabilized shooting radius to just over 2 meters while maintaining complete gimbal functionality. By also using wireless technology, the gimbal head can also be mounted on tripods and sliders so that you can use it as an unmanned remote camera platform.

Manfrotto claims that the 300XM uses upgraded hardware and software to deliver professional-level functionality. the gimbal features an electronic multifunction knob with A and B buttons that allows users to mark shooting points so you can easily and precisely replicate shots. A balance position memory index means rebalancing times are reduced when switching out cameras.

The extra-length arm adjustment allows for payload capacities of up to 3.4kg / 7.49lb can be used.