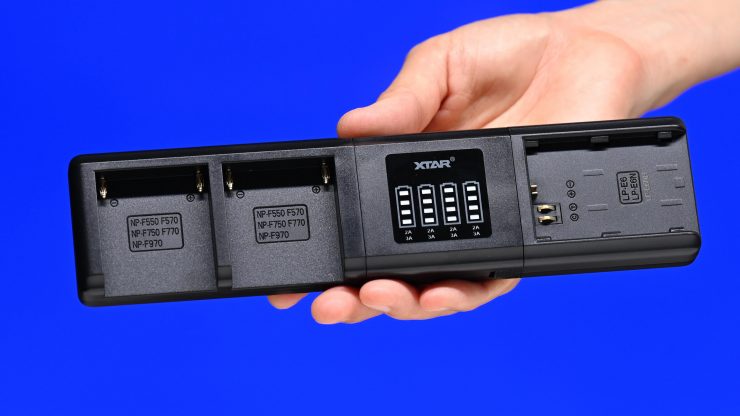 The XTAR SN4 7-in-1 Multiple Camera Battery Charger features a modular design where you can interchange various modules depending on what type of batteries you need to charge.

The charger was fully funded on the Indiegogo crowdfunding platform back in July, but you can dow buy it directly from XTAR.

In theory, the XTAR SN4 7-in-1 Multiple Camera Battery Charger is a good concept, because you don’t have to carry around multiple chargers and power cables if you are using cameras or equipment that use different types of batteries. You can charge multiple batteries and battery types simultaneously at home or on location.

The XTAR SN4 7-in-1 Multiple Camera Battery Charger revolves around a central unit and then you can attach pieces to create multiple configurations so you can charge two or four batteries.

This is a simple, yet clever solution and it allows you to break down the charger into small pieces when you aren’t using it. It also gives you the flexibility to just change over different battery plate modules as required.

Above you can see the process of attaching and removing the modules.

It is nice that the case also has two cut-outs so you can fit in additional battery plates, however, these cut-outs will only take some of the battery plates and not all of the different models.

Robust is not the word I would use to describe the build quality of XTAR SN4 7-in-1 Multiple Camera Battery Charger. It is made out of very lightweight plastic to keep the weight down, but this does mean it feels a little on the cheap side.

The modules click into each other reasonably easily, but I did find that they lacked consistency. Some of the modules were easy to remove, while others required a lot more effort.

Above you can see one of the modules that was more difficult to remove than some of the others.

What batteries can you charge?

The XTAR SN4 7-in-1 Multiple Camera Battery Charger can charge the following batteries:

As the charger is modular, in the future you will also be able to buy additional modules to charge an even larger range of batteries, including Fujifilm, Panasonic, Olympus, and GoPro batteries.

As I mentioned earlier, you can charge up to four batteries simultaneously. The status of the charging is shown in bar increments. Once a battery is fully charged it is shown as for solid bars.

The SN4 supports both the QC3.0 and PD3.0 fast charging protocols. It uses a USB-C charging cable which allows you to plug it into a mains power using the included AC power interface. You could also charge it in a vehicle, via a laptop or power bank.

The charger can support a max 3A charging speed if you just use a single slot.

Above you can see that if I try and charge a Sony F970 battery and a Sony F750 battery at the same time, only 2A is supplied to the F970.

XTAR claims that the SN4 uses a three-stage intelligent charging protocol, which they state greatly reduces battery wear and improves battery life. They also say that the charger will provide the best charging current according to the following criteria:

In English, this basically means it will communicate with the battery and then work out the best way to charge it. What you need to be aware of is that some generic brand batteries don’t communicate with other devices so they may or may not charge well.

According to XTAR, in 1 hour the charger can charge a Sony F970 battery to 40% and a Canon LP-E6N battery to 75%. From my testing, I found these claims to ve pretty accurate.

Now, I did find that with certain third-party batteries they wouldn’t charge at all. Batteries such as the cheaper no-name brand Canon LP-E6 batteries weren’t recognized by the charger.

The XTAR SN4 7-in-1 Multiple Camera Battery Charger is available in various configurations:

With both kits you need to choose which type of extra battery plates come with the kit.

You can also purchase it from the following sites:

The XTAR SN4 7-in-1 Multiple Camera Battery Charger works as advertised. Having the ability to charge four batteries at once (or at least three depending on the model) through USB-C PD on a lightweight and compact charger is great. If you are a traveling shooter, these types of charges make a ton of sense.

It did find that because of the way the charger is designed if you are using one Sony NP battery plate and a Canon LP-E6 plate, you can’t place the charger down flat. This is because the Canon LP-E6 plate has battery slots on either side. This is not a big deal, but it is just something I noticed and you should be aware of.

The XTAR SN4 7-in-1 Multiple Camera Battery Charger is a nice, versatile solution that enables you to charge up to four batteries at once. The ability to mix and match battery plates is very handy for shooters who use different types of smaller-sized batteries.

If you are traveling, having one battery charger that can charge all of your batteries saves space and you don’t have to dig around in bag looking for the correct charger.

It is well priced, and it performs as advertised.