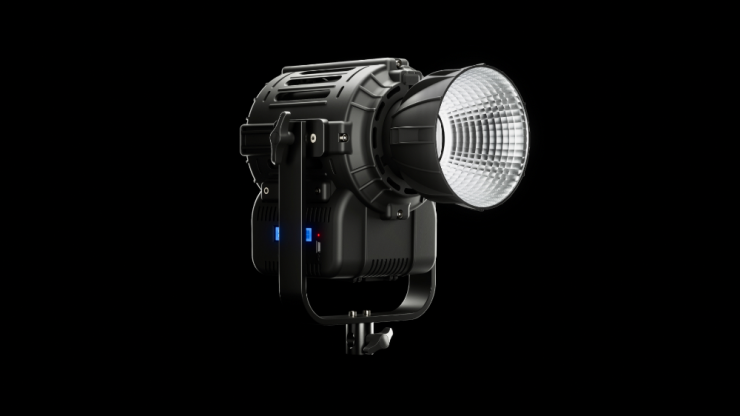 COB spotlights have become increasingly popular due to their versatility and it comes as no surprise that Lupo now wants a piece of that pie. Lupo has been making affordable, high-quality LED fresnels for many years and they were around way before companies such as Aputure, Forza, and Nanlux appeared.

Lupo Dayled LED Fresnels ae very popular with broadcasters, because they are robustly made, offer a good amount of output, and they can be run via camera batteries.

Essentially, Lupo has made the Movielight 300 Dual Color PRO and 300 PRO in the same form factor as their Dayled PRO Fresnel series.

While there are lots of Bowen’s mount COB spotlight options on the market already, the Movielight 300 PRO is one of the few fixtures that have all of its electronics integrated inside the light head, so no separate ballast or cables are required. Yes, this does mean that the light head is slightly bigger than other brands’ products, but you do end up with a fully self-contained light with just a single cable.

How much output does it have?

Below are the claimed output figures for the Movielight 300 Dual Color PRO at 5600K. These figures were recorded by Lupo using the light open face without any lighting modifiers.

The light has a beam angle of 85 degrees which is slightly narrower than most other similar lights. Lupo’s research indicated that these type of COB spotlights are not being used for illuminating a wall or a green screen, therefore, a lot of the light coming out of a larger COB is wasted and doesn’t go where users want. Most users of lights like these almost never use them open face, instead, they use them with lighting modifiers. Therefore a slightly narrower beam angle does make a lot of sense.

The parabolic reflector that will be coming with the light will be 55 degrees.

The nice aspect of a Bowens Mount is that there is a wide array of affordable lighting modifiers you can choose from. Lupo will also be selling its own LUPO DOME PRO for €209 / $244 USD.

Kits will be available

As I already mentioned, the Movielight 300 is available in mono-color or bi-color options and also as a kit that comes in a backpack with a V-mount battery plate and a D-tap cable. Lupo doesn’t sell just kit versions like some other manufacturers because many of its customers (like TV studios) don’t need these additional accessories.

The new Lupo Movielight 300 PRO fixtures should be available in November this year. Below are the expected retaul prices for the various models:

Competition for the Movielight 300 Dual Color Pro and 300 Pro arguably comes in the form of the Amaran 200x Bi-Color LED Light, Amaran 200d LED Light, Godox SL200W II LED Video Light, and arguably the Aputure 300x. Out of all of these lights, only the Aputure 300x can be powered via camera batteries. The Amaran and Godox lights are not nearly as robustly made.