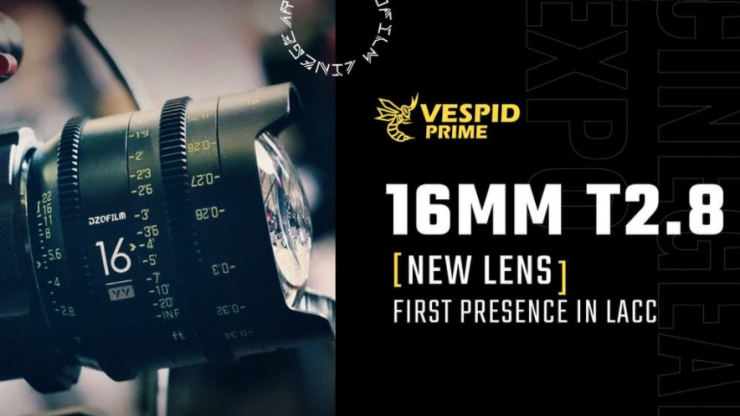 DZOFilm has unveiled its new 16mm T.28 Vespid Prime. This is the 8th lens in the Vespid Prime series and the widest focal length that is available.

The 16mm T2.8, like all of the other focal lengths, covers an image circle up to 46.5mm. The lens features a modern mechanical design and its small size and weight allow it to be used on a wide array of cameras. All the lenses in the series share an 80mm front diameter and common gear positions. I am assuming that is also the case with the 16mm T2.8. The rear of the lens has a magnetically attached rear filter that accepts optional ND filters.

The 16mm T2.8 does have a large protruding front element, so I am fairly sure it won’t have a 77mm filter thread like the other lenses in the series. This could make it unsuitable for use with a matte box.

The availability of the DZOFilm 16mm T2.8 Vespid Prime is still unknown. Although DZOFilm hasn’t released a price yet, it is pretty safe to assume that it will retail for $1,399 USD like the rest of the focal lengths (except the macro).

It is impressive to see a relatively new company bring eight different focal length primes to market in such a short amount of time.