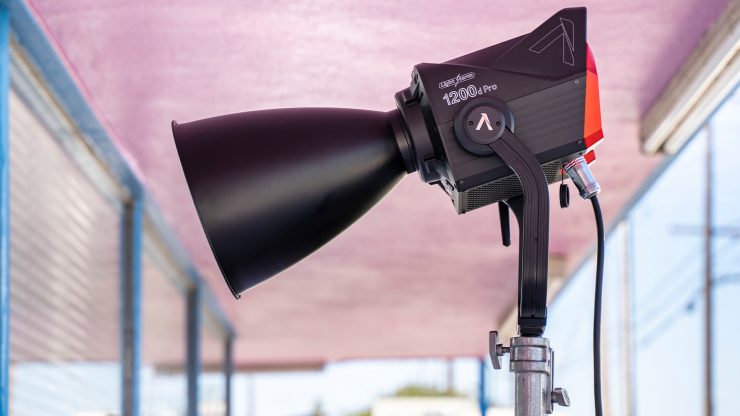 Today at Cine Gear 2021 Aputure announced their brightest light in the Light Storm series with the 1200d Pro.

The new fixture features a 1200 watt COB and it has a maximum power draw of 1440W. There are three new Bowens Mount Hyper Reflectors with varying beam angles:

Aputure states the new Light Storm 1200d Pro can achieve an output of 83,100 lux at a distance of 3 meters with the narrow 15° reflector.

Like all the Light Storm fixtures, the LS 1200d Pro has a Bowens Mount that can be used with a wide array of Bowens Mount soft light modifiers such as Light Domes and Lanterns.

The 1200d Pro fixture is aimed at the pro/rental market, requiring a better build quality. The LS 1200d Pro has a weather-resistant construction so that it can withstand inclement weather. There are no controls on the light its self. All controls are located on the controller/ballast.

The 1200d Pro uses Lumenradio CRMX and Art-net & sACN via an etherCON connector, in addition to the 5-Pin DMX512 ports, to seamlessly integrate into any professional DMX interface.

As you can see in the image above, the 1200d Pro is boxier than the 600d Pro. I would imagine this helps make the light easier to work in tighter locations and cooling.

The LS 1200d Pro doesn’t have a Gold mount or V-mount option for battery power. It has two 48V/15A DC inputs that take power from a battery block. Keep in mind it will need a substantial battery block to power them. You can use one of the DC inputs and get 50% output.

I would use a Honda gas generator/inverter with a long stinger to power it as they cost $1200 and can power up to 2200 watts. That’s a lot cheaper than several thousand for a battery block or two.

COB lights are really kicking it up a notch with higher output and fresnel accessories to tame those COB clusters. 1440 watts is a lot of power, and keeping it from catching on fire has to be one of the biggest challenges without having a giant loud fan running.

With so much output, the 1200d Pro will be great for punching through diffusion or a big softbox. With a lot of power, you have a lot of options. Hopefully, a fresnel will be in the works as that would tick another box in the usability list.

Side note Matt reviewed the Nanlux StormEvoke 1200 that is a 1200 watt COB. Check that one out!