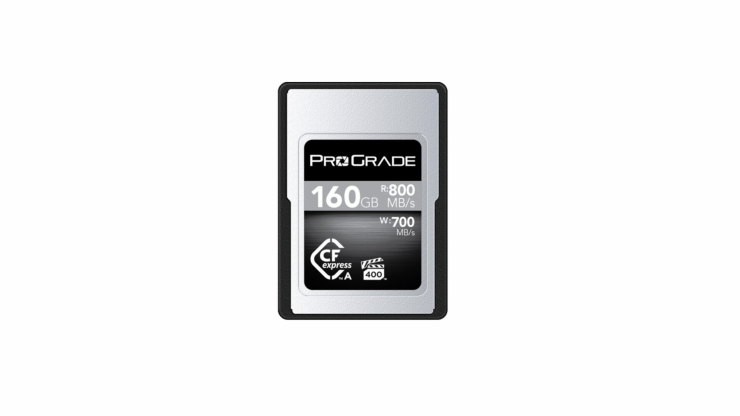 ProGrade has announced a new CFexpress Type A Memory card. The new Prograde card is only available in a capacity of 160GB.

Up until recently, the only CFexpress Type A cards you could buy were made by Sony, and their cards only come in capacities of 80GB and 160GB.

CFexpress Type A is still a relatively new recording medium and there are very few cards available on the market, mainly due to the fact that not many cameras currently support or use them.

The only cameras on the market that currently utilize CFexpress Type A that I am aware of are the Sony a7S III, Sony FX3, Sony a1, and Sony FX6.

The 160GB CFexpress Type A Cobalt Memory Card from ProGrade Digital provides read speeds of up to 800 MB/s, and write speeds of up to 700 MB/s. According to ProGrade, the Cobalt’s minimum write speed is guaranteed not to drop below 400 MB/s, which they claim allows for the uninterrupted recording of a wide variety of codecs, including 4K RAW, 4K and 6K ProRes 4444, 4K, 6K, and 8K ProRes 422 HQ, and more.

Hold on, ‘6K ProRes 4444, 4K, 6K, and 8K ProRes 422 HQ, and more.’ Do they know something we don’t? I am not aware of any cameras that are currently on the market that use CFexpress Type A cards that can internally record ProRes.

The card is resistant to temperature extremes, shock, vibration, and X-rays. This card also takes advantage of an NVMe PCIe 3.0 host controller interface.

As a comparison, the Sony Sony 160GB CFexpress Type A TOUGH Memory Card retails for $398.00.

Not only are CFexpress Type A cards expensive, but their capacities are still tiny.