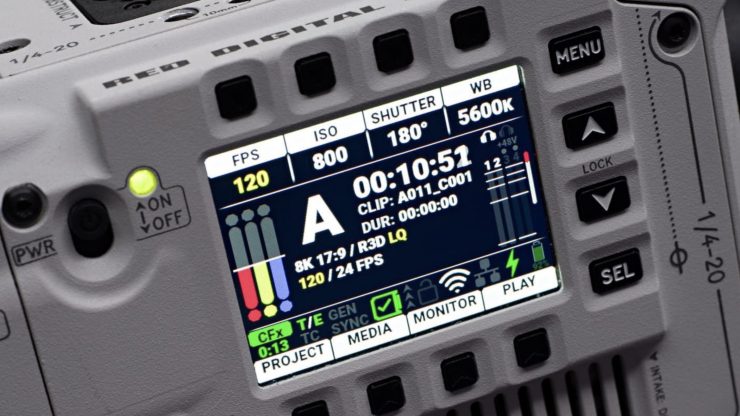 Jarred Land has posted images on his Instagram account, including one with the caption 2 more sleeps… These images appear to show a yet-to-be-released camera.

Maybe RED will finally do away with the myriad of RAW compression ratios and just use LQ, MQ and HQ.

What is also interesting is that the recording is being done to a CFExpress card. Whether this is a CFExpress Type B or Type A card is not known.

The display also shows monitoring for four channels of audio, two of which look like they can be set to +48V

The above image shows two SDI outputs, a USB-C input, a 5-pin Lemo Audio input, 11-17V DC In, and an EXT connector port. The camera is also clearly using a V-lock battery plate, but it is safe to assume an AB Gold Mount will also be available.

The camera is clearly labeled 8K VV, so it will be interesting to see if it uses the exact same sensor as MONSTRO.

The side LCD screen and controls look to be in a similar spot to where you would find them on a RED RANGER MONSTRO 8K VV.

From the images that have been released, it appears that this new camera will share a similar cube-style body shape to a KOMODO, and not a larger body like the RED RANGER MONSTRO.

What I would suspect is this will be the first new RED camera in the DSMC3 series.

There is no further information about anything else. We have no idea what type of mount it will use, what the other resolutions and frame rates will be, or how much the camera will cost. The display doesn’t show any in-built ND, which is something RED still hasn’t been able or willing to put into its cameras.

Like most RED teases and announcements you should expect that it won’t actually be available or shipping for quite some time.

Whether or not this is a direct MONSTRO replacement is also not known, but there is probably a very good chance that it may well be.

I think RED has slowly been trying to pivot its business strategy, especially when it comes to cameras. If you look at the KOMODO, it is by far RED’s most affordable camera. If I was to guess, I would say that whatever this new camera happens to be, that it won’t carry the hefty price of previous RED 8K cameras.

RED used to have higher resolution cameras than other manufacturers, but that is no longer the case. This new camera will have to be competitively priced to succeed, given there are quite a lot of cameras on the market now that are now capable of recording in 8K. Not only can these cameras record 8K, but they are also available at relatively low prices. You can’t win over consumers anymore with resolution hype, you have to offer something else to be competitive.