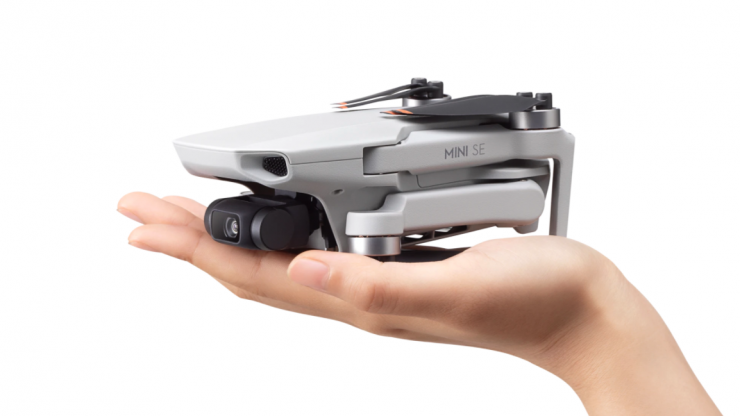 DJI has announced a new entry-level drone for beginners called the Mini SE. This new drone features a 1/2.3″ CMOS camera that is capable of capturing 2.7K video and 12MP stills. It has 30 minutes of flight time, and it can transmit HD video from up to 2.5 miles (4km) away.

The Mini SE appears like it is only being sold in the US. I couldn’t find it listed on mentioned on non-US DJI websites.

The DJI Mini SE tips the scales at 249 g / 8.78 oz, which is the exact same weight as the Mini 2. In a lot of ways, it is just a slightly dumbed-down version of a Mini 2 that can’t shoot UHD and doesn’t have Ocusync.

On paper, the Mini SE appears to be almost identical to the original Mavic Mini. They both use the same camera and same video transmission system, as well as having the same flight times. The biggest difference between the Mini SE and the Mavic Mini is that the Mini SE uses the exact same body as the Mini 2. This means it is slightly lighter and better in stronger wind conditions.

The standard weight of the aircraft (including battery, propellers, and a microSD card) is 242g, this means registration is not required in some countries and regions. However, you should always check local rules and regulations before use.

The DJI Mini SE does not support obstacle sensing. DJI recommend that beginners use DJI Mini SE with the 360° Propeller Guard to protect the propellers fully and improve flight safety.

The Mini SE can shoot in the following resolutions and frame rates:

Like most DJI drones, the Mini SE comes with multiple QuickShots functions. These include: