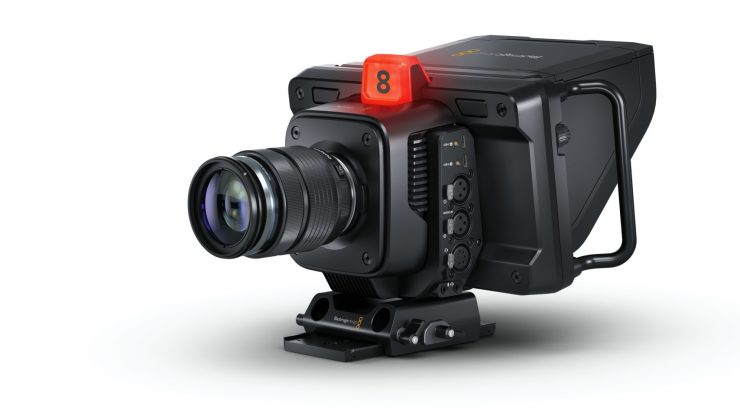 The Pro model includes some nice refinements and added features such as carbon fiber reinforced polycarbonate and a large integrated 7″ touchscreen viewfinder with an improved sunshade. The camera uses an improved Micro Four Thirds sensor that BMD states performers much better in low light with 13 stops of dynamic range and dual native ISO of 0db and 18db gain. Both cameras have a larger, brighter Talley light on top.

The USB-C output supports recording to an external SSD; however, it only supports Blackmagic RAW.

The 7″ screen is now a touchscreen with 2000 nits brightness. The camera has three assignable buttons on the back and dials for Brightness, Contrast, and Peaking. The menu is accessed with the touchscreen and has the familiar and easy-to-navigate menu you are probably already familiar with.

with all studio setups, lens control is a must. These new USB-based controls are going to make operating the camera with stills lenses much better. It will require compatibility with lenses, and a list of them hasn’t been released yet. Both Zoom and Focus Demand will retail for $245.

This is a nice update to the Studio line. They are very cost-effective for live or studio use in a Multicam setup. When integrated with an ATEM Mini, you have a lot of controls for live streaming. All at a highly competitive price. While these new cameras might not be designed for outdoor use, it would have been nice to see them have internal neutral density filters.