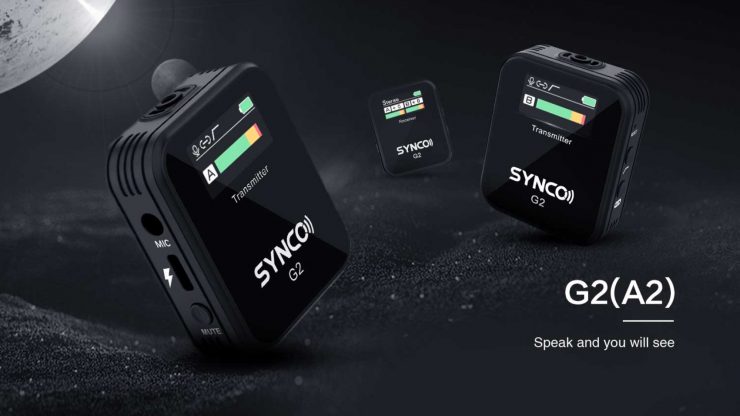 The Synco G2 budget wireless audio system is the follow-up to the G1. Essentially they are very similar apart from newly added display screens on both the TX and RX units and

Synco states that the G2 uses the Syncoder Encrypted Transmission Algorithm 2.0 that is claimed to enhances the signal stability of the digital microphone system. It has a claimed operating range of 492ft / 150m (Line-Of-Sight) and 164ft/50m (Non-Line-Of-Sight). It uses a Frequency Hopping Spread Spectrum (FHSS) technique to detect the location on its own and then by itself turns to the optimal frequency so that no signal conflicts would occur. As a reference, the RØDE Wireless GO II has an operating range of 656.2ft / 200m.

The G2 systems come with a built-in microphone and one or two lavalier microphones depending on which version you choose. They don’t feature internal recording like the RØDE Wireless GO II.

According to Synco, the G2 3-in-1 charging solution allows you to charge two TX units and one RX unit at the same time with one power source. It is claimed that it only takes 40 min to get the system to 50% charge, and 1 hour to reach 80%. The internal battery supports up to 8-hours of continuous use.

There is a dedicated mute button as well as low cut and gain buttons.

Here are the prices for the two different versions: