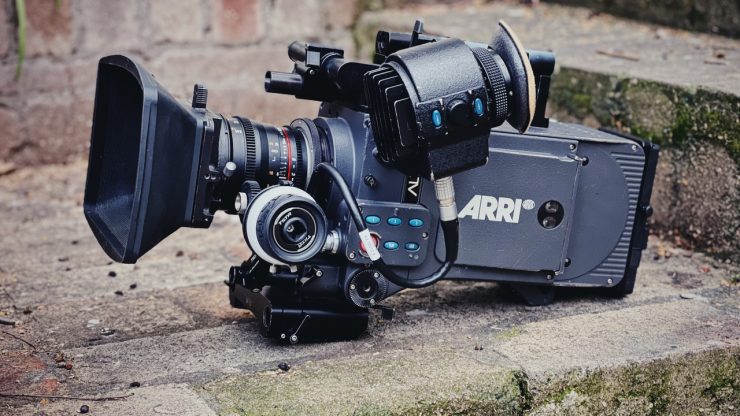 Matching different brands of cameras for drama is something that traditionally fills filmmakers with dread. Despite this, in mid-2020 Australia was coming out of its first COVID lockdown and Director Clara Chong and I were preparing to go into production on the feature film “DARK NOISE” and deliberately made that choice with both the ARRI ALEXA and the Blackmagic URSA Mini Pro G2.

It was a strange time to begin shooting a film but there was also an opportunity because Australia had successfully flattened the curve on the first wave and while other productions were still in a holding pattern, we could take advantage of the simultaneous availability of all of the cast and locations that we wanted for DARK NOISE. Because we had been preparing for a couple of years, we already had a clear idea of how we were going to approach the film and what Clara wanted visually.

Starting production so early in the COVID era meant a lot of limitations such as obeying the government’s 4 square meter rule which often meant that only Clara and I would be allowed into the room with the actors, working 8 hour days to provide adequate rest to strengthen the cast and crew’s immune systems and shooting in short blocks rather than a continuous schedule.

With all this in mind, it would seem even crazier to add another factor of complexity by using different cameras. Now in the middle of the color grade, that decision is holding up very well.

The URSA and ALEXA are both favorites of mine. Cameras that feel like a real camera and are great to operate while producing reliably lovely pictures. During our very rapid pre-production process, I conducted a set of camera tests to show Clara some options.

When I showed the first tests to Clara, she instantly fell in love with the ALEXA’s rendering of skin tones as something that would be useful for parts of the visual style of the film. The other thing we tested was whether it was workable to intercut the ALEXA and URSA and we were both very pleasantly surprised with how easy this was.

Part of our production strategy for making the film work during early COVID was that we would not be externally renting any of the gear. After many years of accumulating gear for our commercial and documentary work made this possible and a huge part of this is not just the headline equipment gear but the plethora of “bits and pieces” that are essential for making things work consistently on a fast-paced shoot.

With all of this in mind, ARRI Australia put together an ex-rental ALEXA-EV package through their CPO program for us to purchase. This was the ideal way for us to get the ALEXA look we wanted, at a reasonable cost level but without sacrificing the Rolls Royce level of service, support, and calibration that we expect from ARRI.

The full-sized ALEXA has a bit of a reputation these days as a big and heavy camera but it is actually closer in size and weight to a 16mm SR-III than to a 35mm Panaflex or 535 and there have been plenty of documentaries and low budget dramas happily shot with an ARRI 16SR!

With this in mind, Clara and I concluded that using the full-sized ALEXA would not slow us down and would be manageable, even on the days when it would only be the two of us and the actors on location.

The camera selection also included a DJI Mavic Pro drone, a BMD Pocket 6K for gimbal and tight spaces, a Canon 90D for time-lapse, and a stripped-down URSA G1 which we set up in a backpack kit with a set of Canon EF-S zooms as a lightweight scenic kit that we could throw in the back of our car to grab scenery where and when we found it over the course of the shoot.  Clara and I would often laugh noting we often had more cameras that crew on set!

Another important part of both getting the look we wanted in a package that was portable enough to not slow us down on our tight schedule and with limited support was the choice of lenses. The Rokinon/Samyang DS Cine Primes have become a favorite of mine for these reasons. While the plastic barrels of these lenses do not endear them to focus pullers, they do make them small and very light for modern cine lenses. This means that I can easily carry a full kit of primes in a Pelican Air case and have all the lenses ready, even when traipsing through the forest.

We made the decision to frame the film in the 2.40:1 Scope ratio because the landscape and locations would be such an important part of the film, Clara wanted to make sure the aspect ratio would give us room to keep the environment as a major presence in the frame, even for close-ups.

As with the choice of camera, Clara had strong ideas on which focal lengths would work creatively for different moments in the story, and on our 2.40 Super 35mm frame the 24mm and 50mm both T1.5 were goto lenses for most of the dialog scenes. I knew that while the 85mm has a lovely look, Clara preferred the 50mm most of the time and we reserved the 85mm for certain moments of visual punctuation. One of the other nice surprises of this little kit is the superb lens flares which Clara and both felt, rival much bigger and more expensive glass. The 35mm in particular, when wide open at T1.5 delivered us some gorgeously dramatic lens flares in very important scenes. The 16mm and 100mm macro got less use but were essential when needed and are both great lenses as well. These were backed up by a selection of Canon stills zooms and the L-Series 24-105mm became our workhorse for daylight exterior action scenes in the National Park setting.

Because these lenses were all Canon EF mount, we asked ARRI to supply our ALEXA with the LEITAX EF hard mount which worked flawlessly throughout the shoot and allowed us to make the camera choices completely independently of the lens choices.

One of the things I love about both the ALEXA and the URSA is the fact that both are able to function with virtually no rigging, straight out of the camera case because both the ergonomics and built-in features are very traditional for motion picture production cameras.

As part of her prep, Clara marked up the script with her preference for ALEXA or URSA for each scene, based on her plan for the visual style of each point in the story. There was no simple delineation like different subplots or flashbacks for this but rather a very subtle shifting of the visual emphasis to hit the emotional notes required for each scene. Her deep familiarity with the characteristics of the image from both cameras made it possible for this to be a very intuitive decision-making process and while I was quite prepared to argue for one camera or the other for a particular scene, I didn’t end up doing this at all on the shoot – the choices simply felt right emotionally and creatively for each scene.

On location, we prepared ProRes Proxy files in Resolve using a 16” Macbook Pro with a BMD e-GPU which meant that Clara could have each day’s footage available in Final Cut Pro after dinner that evening. This was all done using ACES but for the final grade, we decided to do extensive testing and decided to switch to a manual color management pipeline, partly so that we didn’t lose access to the beautiful ARRI Log-C curve.

In DaVinci Resolve 17 it is now possible to also decode the Blackmagic RAW format directly to ARRI LOG-C so that both cameras can use the same workflow and processing and this includes the use of the standard LUTs like the ARRI K1S1 and occasionally the superb film emulations from the Dehancer OFX Plugin. As with the lenses we have been able to use these interchangeably between the two cameras for purely creative reasons in a scene.

The powerful options for custom image scaling algorithms in Resolve and the ease of realtime processing on the Mac Pro, have also meant that the differences in resolution between the cameras have been a complete non-issue in the 4K DCI finishing.

As we’re now near the end of our post-production process it is interesting to look back at that decision to mix and match those different cameras. With benefit of hindsight, we are even more enthusiastic about the creative freedom that this allowed us and the results that it has delivered. At the end of the day, it is all about being able to give the director the look they want so that it can fit with every other aspect of the production from performance to production design and being able to give a visually savvy director like Clara this palate of options to fine-tune the look so precisely has been a very exciting process both as cinematographer and colorist on this film.

The robust and beautiful images from both the ARRI and BMD cameras along with the seamless workflow in DaVinci Resolve made all of this possible and practical despite the restrictions of making an independent feature film in the COVID world.