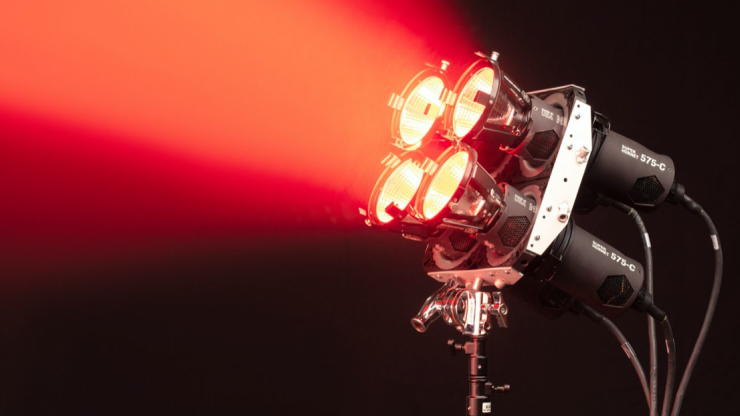 Hive Lighting’s Quad Bracket allows you to place four Super Hornet 575-C PAR Spot Omni-Color LED Lights in an array. By doing this you end up with a 13” x 13” footprint that can provide a ton of output. The array draws 16 AMPs on 120VAC of power.

Lots of lighting companies have previously made brackets so that users can create larger arrays. Digital Sputnik, ARRI, Rotolight, and Aputure all have solutions available.

Hive Lighting claims that the array of four 575-C’s is twice as bright as an ARRI Skypanel 360, but ¼ of the size and a ⅓ of the weight.

The array is said to be able to produce 1000 FC @ 10 ft, all while weighing in at just 25lb / 11.34 kg (head weight only). What you clearly need to remember is that you still need to use four separate power supply/control boxes.

You can group all four lights in Hive’s iOS/Android App or via DMX so that all of the fixtures respond identically with the single touch of a button.

The CX/C-SERIES QUAD BRACKET retails for $663.72 USD. It is also available for rental now in New York and Los Angeles.