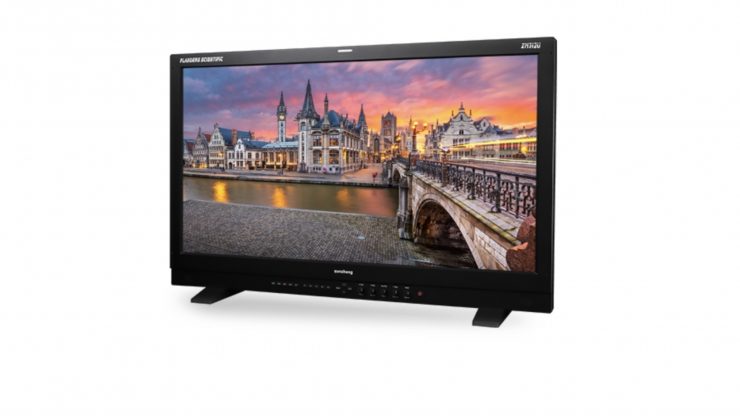 Flanders Scientific has announced the XM312U, a 5,000nit capable HDR Mastering Monitor. It will be available in the northern hemisphere fall of 2021.

The XM312U is a 31″ UHD resolution HDR and SDR reference master monitor equipped with 12Gbps SDI inputs. The XM312U qualifies as a Dolby Vision mastering monitor. With a peak luminance of over 5,000cd/m2, it supports both PQ and HLG EOTFs, and multiple color gamut selections. It also features a contrast ratio in excess of 5,000,000:1.

The monitor features a full-array local dimming backlight with over 2,300 individually controlled LED elements. Compared to the XM310K that it replaces, the XM312U is claimed to feature a 20% improvement in the ratio of backlight zones to pixels, twice the panel static contrast ratio, and a peak luminance that is over 2,000nits brighter.

With 12Gbps SDI connections 4K and UHD signals can be sent to the display over a single cable. Quad 1.5Gbps and 3Gbps SDI connectivity are also supported ensuring compatibility with practically any type of 4K or UHD output. The XM312U supports advanced 12bit 4:4:4 YCbCr and RGB signals setting it apart from less advanced monitoring solutions.

The XM312U also features the unique ability to simultaneously supply a clean 12G / 6G loop through and real-time down converted 3G or 1.5G output. Any incoming single link 4K or UHD signals can be converted to 2K or HD outputs for downstream HD monitors or scopes, all without needing any standalone down conversion equipment.

The IP Remote Utility can be used to remotely toggle functions, switch inputs, and navigate the menu on Flanders Scientific monitors using your Mac or PC’s keyboard, mouse or control panel. It is also available for iOS devices.

The XM312U also features direct compatibility with on-set color applications like LiveGrade Pro and Prelight for real-time color manipulation without the need for a standalone 4K LUT box.

The XM312U can be used for multi-cam monitoring applications with support for simultaneous viewing of up to 4 genlocked HD feeds and the additional ability to view any feed full screen as needed. It also features all the usual scopes and monitoring tools you would expect to find on a high-end monitor.

In our industry HDR projects are typically being requested at either 1,000nit or 4,000nit deliverables from colorists. Up until now, the Flanders Scientific 3,000nit capable XM310K was one of the few solutions available that allowed colorists to grade well over 1,000nits, but it still fell short of that critical 4,000nit deliverable threshold. With the XM312U, Flanders Scientific set out to not only meet that 4,000nit goal but go beyond it.