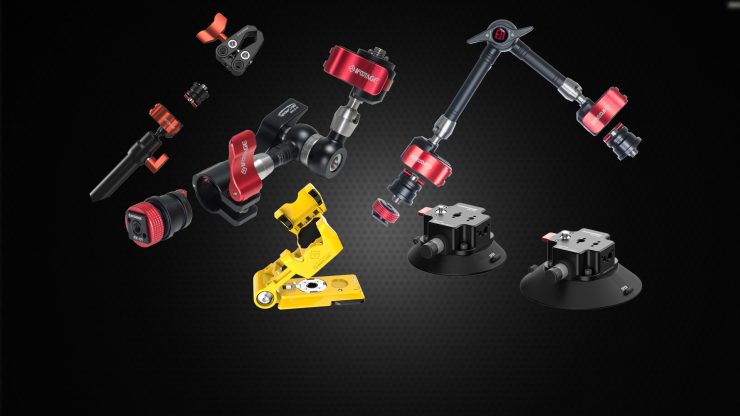 I’ve been using the prototype of the Spyder Crab system for some time now, and I have to say I like the product a lot. Its innovative design allows for quick changes with an assortment of kit. While this is the official release, and I don’t have the final versions in hand, I feel confident that I can comment overall on the Spider Crab system.

The secure quick-release system design is good, as you can take the hardware off very quickly from the camera or rig, making it easy to swap out devices or break down. There are five Spider Crabs to choose from, including a telescopic arm with a jaw that is capable of clamping down on pretty much anything.

The sturdy and well machined Spider Crab Magic Arm comes in two models. Both have the same base Magic Arm; however, the MA model has the quick release system while the LT model doesn’t.

The Magic Arms have large gripping teeth to prevent slipping. They feature a nice large 59mm knob to tighten the section down.
The quick-release system has a clamp similar to what you see on a tripod leg extension, only smaller and built for purpose. To prevent accidentally disengaging, you have to push a button on the side to remove it from the mount fully. The clamp locks down very tight.

Inside the clamp is three pins that prevent the mount from twisting even under heavyweight.

The options are a convertible 3/8″ Arri Accessory mount with dual pins to prevent twisting. The outer 3/8″ screw and dual pins are spring-loaded. When they are pushed in, reveals a 1/4 20″ screw. This is such a great design for versatility. So many cages are adding the Arri Accessory mount taps making the Spider Crab an excellent option for mounting anything needed on the camera securely and removing it quickly. Pretty much all devices have at least a 1/4 20″ tap available.

The Spider Crab Magic Arm comes with a male Cold Shoe and convertible accessory mount. Additional mounts will be available, so you can go Spider Crab crazy on all sorts of kit with the quick release option.

The support rod can be used as a stand for a monitor or as support for a slider. How you utilize, it is up to you.

The Support Rod includes a quick-release jaw clamp that opens up wide at approximately 2″ or 57 mm”—plenty for mounting on a C-stand, combo stand, or tripod leg. You have to be careful when using clamps on carbon fiber, as overtightening can crack a leg.
I have used it to hold a shotgun mic just out of frame for live streams. It didn’t mount it with the jaw clam since the tripod has a mount on the collar.

Another good use for the SA-32 is to get the wobble out of a slider by adding support on end or ends of the slider. Most sliders have mounting points on each end, including the iFootage Shark Slider.

The phone holder is new to me as well as the Suction Cup mount. These look very handy indeed.

The lightweight composite spring-loaded phone mount can be mounted on the Magic Arm, suction cup or mini tripod stand with the 1/4 20″ tap on the bottom. The phone holder itself can swivel from portrait to landscape, and the base can pan. On the base is a lock to keep the phone holder in the desired position. If you want to add a mic or small light, a cold shoe is available on top of the spring-loaded phone holder.
The base has a removable rubber cover to protect the surface or countertop from scratches.

There is a swing-out extender on the bottom so the base can be mounted on a Manfrotto fluid head directly into the quick release slot. The base is also Arc Swiss compatible.

The phone holder comes in four colors to choose from. Black, Grey, Yellow, or Red.

The vacuum pump Suction Cup accessory comes in two sizes. Each has multiple mounting points on the top and sides. A hidden reversible male 1/4 20″ and 3/8″ screw can be used to mount directly. It features a quick-release button to dismount the hardware attached.

I’m looking forward to getting the retail versions, as the prototypes worked great for me. I like the Arri Accessory mounts a lot. Having the two pins on each side gives a solid twist-free connection. The added convertible 3/8″ to 1/4 20″ screw is a bonus. It will be interesting to see if iFootage releases more QR mounting options in the future. While the Magic Arm has been around for ages, the Spider Crab adds a new twist at an affordable price.