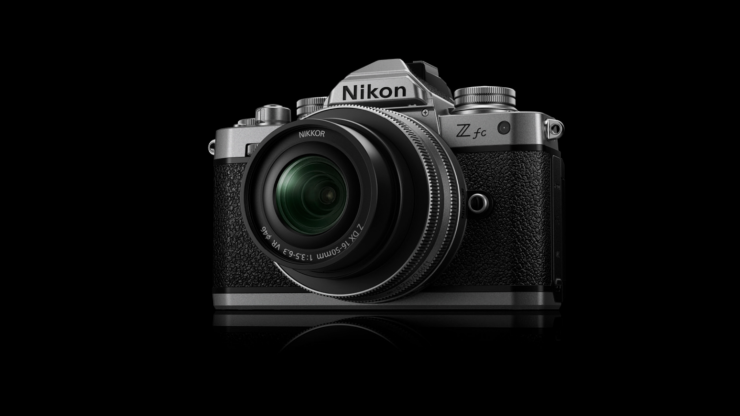 Despite the strange name that makes it sound like an eastern European football team, the Z fc is the first retro-style camera since the Nikon Df which was released way back in 2013. However, Nikon states that the Z fc draws its inspiration from the FM2 which dates back to 1984.

Each dial is carefully machined from aluminum, and the top surface is all engraved. The Nikon engraved characters that were found on cameras in the 1970s and 1980s, as well as the circular eyepieces, are also used on the Z fc.

With the actual name Z fc, The “f” stands for “fusion”, which according to Nikon, indicates the “fusion” and feel of precision equipment and high image quality. The “f” symbolizes the camera that built Nikon’s history. The “c” represents “casual”.

The Nikon Z fc utilizes a 20.9MP (23.5 x 15.7 mm size) CMOS sensor and an EXPEED 6 processor. Like most modern-day mirrorless cameras it features a flip-out vari-angle LCD screen. The electronic viewfinder is a 0.39-inch XGA OLED, with approx. 2.36 million dots.

Like most Nikon mirrorless cameras, the Z fc does feature video capabilities, but there is nothing that is going to jump off the page. You can record UHD at up to 30 fps with no crop and Full HD at up to 120fps.

Video can be recorded in H.264/MPEG-4. The below resolutions and frame rates are possible:

I couldn’t find any information listing whether it was internally recording 4.2.0 8-bit or 4:2:2 10-bit. The maximum bitrate is 144Mbps when recoding in UHD or Full HD slow motion.

There is a Type D HDMI connector, but again, I couldn’t find any information about what can be sent out over HDMI.

There is no D-Log, but you can choose to use Picture Control [Flat] if you want. The full list of picture profiles is:

There is a microphone jack as well as a built-in stereo microphone. There does not appear to be any headphone jack.

Unfortunately, the record times are limited to 29 minutes 59 seconds.

The Z fc’s USB-C charging and data port allow for tethered shooting. You can also use the USB-C to externally power the camera and charge the battery.

Just like all the other Z mount cameras, you can use NIKKOR Z lenses as well as F-mount lenses using the optional FTZ Mount Adapter.

If you are one of those people who enjoys adding something extra to your camera, Nikon also has a “premium exterior” package, that allows you to replace the artificial leather part of the body according to your taste and lifestyle. There are 6 colors in total for the premium exterior: sand beige, mint green, natural gray, coral pink, white, and amber brown.

The Nikon Z fc will retail for $956.95 USD and it is expected to be able to pre-order from July 1st.

There are also two other versions available that come with a lens:

I like the styling and homage to Nikon’s past cameras, but styling can only take you so far. While the Z fc looks to be a decent enough camera, Nikon has been struggling with market share in the mirrorless sector and they need to start making cameras that not only look good but also offer something over their competitors.

The Z fc is clearly being targeted at a younger audience and social media content creators.

Nikon is clearly trying to lure potential buyers in with the retro styling and it will be interesting to see how many Z fc cameras they sell.

Above you can see a couple of short videos that were shot with the Z fc.

What are your thoughts on the Z fc? Let us know in the comments section below.