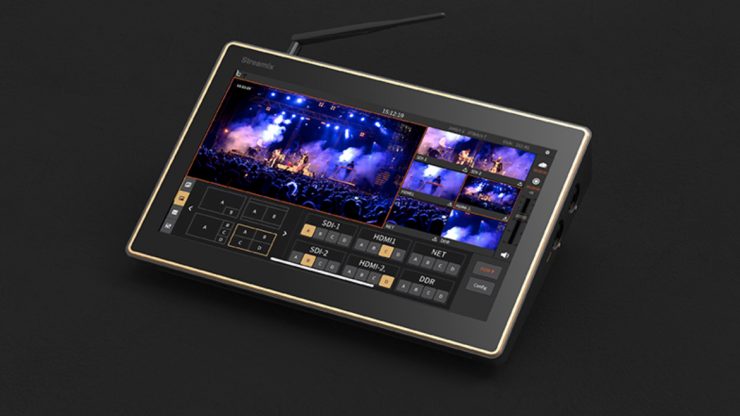 It has been designed to be a one-stop solution if you need to record, stream and switch multiple sources of video and audio.

It features an 11.6″ touchscreen, however, you can also connect up a mouse if you prefer.

There is also a multi-view screen so you can see all of your sources at the same time.

You can live switch up to 6 video sources, however, the Streamix M1 is only equipped with 2 SDI and 2 HDMI inputs, so the other two sources need to be via a NET or DDR channel.

You can live stream to 3 different platforms such as YouTube, Facebook, or any other platform that supports RTMP simultaneously. Streaming can be done via a wired or wireless internet connection.

You can stream at 1Mbps, 2Mbps, or 4Mbps. The device is limited to streaming full 1080p images.

The Streamix M1 also supports internal recording and features 256GB of internal memory. According to Hollyland, it also features intelligent power outage protection that makes sure that your material is saved safely even in event of a power outage.

For streaming to social media platforms, the Stremix M1 lets you adjust the aspect ratio between portrait or landscape modes.

The unit has an SDI Out, HDMI Out, and a Monitor out so that you view your live streams on larger screens or record your stream externally.

You can also set up a system where you can wirelessly send images from cameras using Hollyland wireless video products.

If you own a PTZ camera you can control and operate that camera through the use of an RJ45 cable. You cannot control regular cameras through the SDI and HDMI inputs.

The Streamix has a vast library of overlay effects so you can add images, emojis, text, and other forms of content. There are built-in templates that you can use or customized templates can also be imported from other devices through the USB connector.

As far as audio is concerned, it is equipped with an XLR/TRS audio interface. There is a 3.5mm audio out for monitoring through headphones.

On the switcher itself, there is an analog mixer. This lets you mix multiple audio sources and adjust the volume via the touchscreen.

In a nice touch, two remote live steam switchers can be connected by entering a director code. This way, two devices are able to share their screens so you can do cross-regional streaming.

It certainly looks to be an interesting device, and it is interesting to see so many live streaming/switching devices coming to market recently.