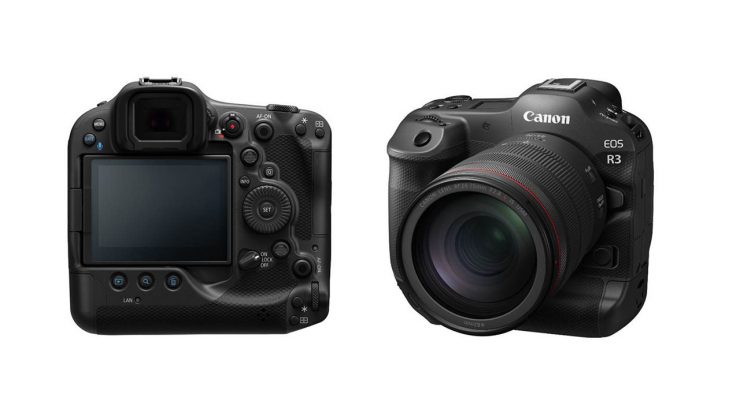 Canon has announced more details about the upcoming EOS R3. These details include information about a new form of object tracking and the ability to record oversampled 4K video and RAW internally. We can also now see final images of the front and the back of the camera.

Canon revealed that the EOS R3 will have a new AF tracking mode, with the ability to recognize and accurately track cars and motorbikes. Even, in low light levels at -7EV or lower. This is in addition to the people and animal (including birds) tracking modes.

The AF mode will work when shooting raw at up to 30fps.

Today, Canon confirmed it will capture quality RAW files at up to 30fps with full AF/AE tracking. Flash sync is now possible with the electronic shutter when used with external Speedlites, and rolling shutter distortion when shooting fast-moving subjects has been reduced.

For many of us, we are more interested to hear about the video specs of the camera. The EOS R3 will record oversampled 4K, with the ability to record RAW footage internally. Canon hasn’t mentioned whether the camera will be able to record 5.5K (5472 x 2886) RAW like the EOS-1D X Mark III. There is also no mention of what formats this is, whether it’s Canon’s RAW Light or full RAW. The EOS R3 will also be able to record in Canon Log 3 and the same object recognition available to still photographers is also available to videographers.

The EOS R3 will have a tough, magnesium-alloy body featuring dust and weather resistance to the same level as Canon’s EOS-1D X series.

The camera is powered by an LP-E19 battery, the same as the one found in Canon’s EOS-1D X Mark III cameras. This is great if you already own the 1D X series or are planning to upgrade to the EOS R3.

The camera will also offer a choice of controls with both a multi-controller and a smart controller. There are three customisable dials on the body, plus a Lens Control ring on each RF Mount lens. This allows shutter speed, aperture, ISO, and exposure compensation all to be adjusted while the camera is at the photographer’s eye.

Many will like the addition of the tilt screen on the camera. The EOS R3 has what Canon calls a Vari-Angle screen, which folds out to the side and rotates.

What’s more, the EOS R3 will feature a new accessory shoe that provides data communication and power for new accessories when attached to the camera. Who knows, maybe Canon will make an XLR audio adapter that is similar to what both Sony and Panasonic offer.

For offloading images, the camera has a built-in Wired LAN socket and 5GHz Wi-Fi, allowing communication with computer networks, laptops and mobile devices.

No pricing information for the EOS R3 has been released.