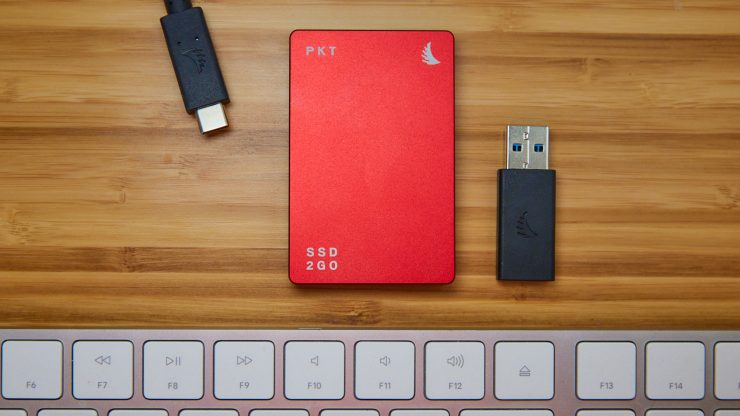 Portable drives are a necessity if you work on the go. Even with laptops having very large internal hard drives, you generally have to have media or files that you transfer from the primary system. If you edit pictures and video, then chances are you will be using an external hard drive for all that media.

I have several for different reasons. Generally, the faster verities are for video editing, and the slower ones are just to get files to and from various systems.

SSD Drives For The Win

These days a 2.5″ spinning portable drive seems like an old idea, and I have to agree as they are slow and prone to failure. An SSD option will give you much faster read and write speeds without the worry of mechanical failure. Yes, nothing is perfect as you can have an SSD drive fail, but they are much more reliable than the old spinner, plus they use much less power, so your laptop will last longer on battery power.

I have a few SSD portable drives. Samsung is very popular, and the Angelbird models are too. As for reliability, they have been rock solid and fast. The Angelbird SSD2GO PKT 1TB is much smaller than the previous models. I like the build quality and look of these drives a lot.

The PKT is dust and splashproof. It is sealed and has a durable aluminum enclosure that looks good too. Angelbird states it is also high-temperature, electrical shock, x-ray, and magnetic field proof. But is it Erik proof?

The SSD2GO PKT uses a USB-C 3.2 Gen 2 connector and comes with a USB-A adapter, just in case. The drive and connectivity are fully compatible with the latest standard USB 3.2 Gen 2 10 Gb/s inputs.

The Solid Connect Interface adds some security to the drive as the cable inserts inside the SSD2GO. This feature is also found on the Angelbird card readers. I like it, but you have to be careful not to lose the cable as the size of the connector is not standard, and other generic USB-C cables probably won’t fit inside the slot. I say perhaps because I have had luck with cables with a smaller end, but that defeats the design of a secure, tight fit.

Angelbird states the speed for the SSD2GO PKT MK2 as follows.

I used the Blackmagic Design Disk Speed Test app and set stress to 4 GB to test the speed. The speed is very good at 449.3 Write and 526.8 Read. The drive is USB-C 3.2 Gen 2, capable of 10 Gbps (10 Gbps = 1250 MB/s), so the connection is faster than the SSD can deliver, which is very common. We are topping out with throughput on computers, and the room for more speed has to come from the media. Like all things, tech speed and capacity will improve over time, but for now, these little drives deliver excellent speeds for editing video and fast file transfers.

Also included are colorful icons for the SSD2GO PKT MK2. I like them as they stand out much better on the desktop. If you are like me and have a messy desktop, you will appreciate a little customization.

To keep the SSD2GO PKT MK2 in tip-top shape, Angelbird includes SSD Manager. This piece of software basically is a TRIM feature that cleans up The SSD and can improve the performance of writing data to the SSD and contribute to longer SSD life. I’ve been advised not to run TRIM on your main OS internal SSD drives as your operating system handles this in the background.

I’ve been using the SSD2GO PKT MK2 for about a month with no issues. It fast and dependable. What more can you ask for from an SSD drive!