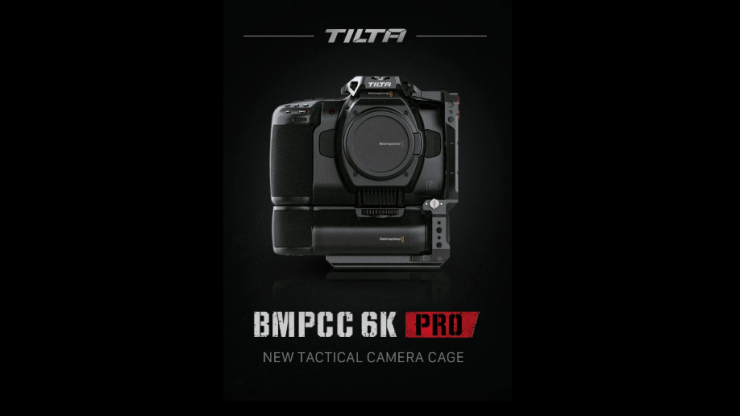 Tilta has teased its new BMPCC 6K Pro Camera Cage & Accessories. Before you get too excited, there are no details on pricing or availability.

The cage itself doesn’t look that much different from the previous BMPCC 6K solution, but what is interesting is the extension arm and patented Viewfinder Extension that allows you to relocate the Blackmagic Design Pocket Cinema Camera Pro EVF.

The Tilta Viewfinder Extension looks to be a clever solution. Essentially it is just an interface that attaches to the camera where you would normally mount the Pro EVF and a long extension cable that then goes to another interface where you attach the Pro EVF.

The Viewfinder Extension and Extension Arm then allow you to mount the Pro EVF in a variety of different positions. At least, in my opinion, this makes the Pro EVF a lot more usable, especially if you are using the camera on a tripod or a shoulder rig.

The cage itself has been designed to tightly hug the contours of the BMPCC 6K PRO while providing plenty of mounting points.

On the bottom of the cage, you will find a well-thought-out screw hole layout that allows you to mount your BMPCC 6K Pro to various quick release plates, or directly onto gimbals or tripods. In a nice touch, Tilita has also integrated spots to keep the included flat head screwdriver and a hex key.

With the ability to record externally via USB-C on the BMPCC 6K, Tilta has several options for mounting and securing various SSD drives.

As you would expect there are cable clamps for both the HDMI and USB-C ports.

Tilta has also designed the cage so that you can attach and use the Blackmagic Design Pocket Cinema Camera Battery Grip for 6K Pro.

The Tilita BMPCC 6K Pro cage is also compatible with a range of Tilta’s accessories.

As I already mentioned there is no current indication about pricing or availability.