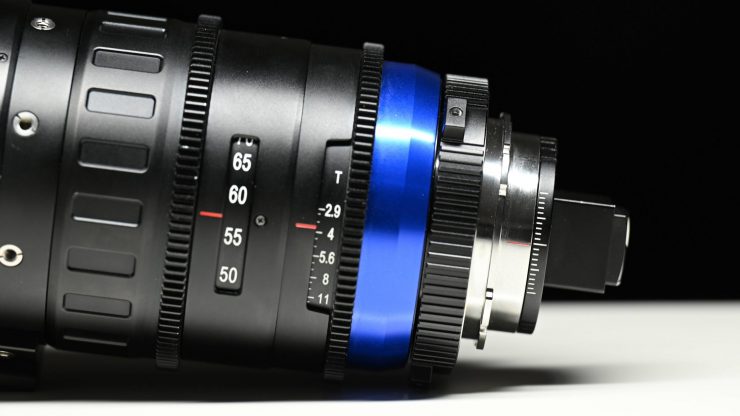 The Laowa 1.33x Rear Anamorphic Adapter has only recently made it to market. It was first showcased way back in September 2019 and it has taken a long time to start shipping.

Above you can see our interview with Laowa about the 1.33x Rear Anamorphic adapter from IBC 2019.

So what is it and what does it do?

As its name suggests, this is a 1.33x Rear Anamorphic Adapter that you place behind compatible PL mount lenses.

If you use Laowa’s own OOOM 25-100mm T2.9 or a compatible cine zoom or prime lens you can attach the Rear Anamorphic Adapter to create a 2.35:1 widescreen ratio when using a 16:9 sensor. This is way better than just letterboxing your 16×9 footage in post because you retain resolution.

Even though it is called an Anamorphic Adapter, it won’t produce oval bokeh and expand the horizontal field of view like a front anamorphic would. However, it still introduces a distinct look with flares and bokeh.

When using the adapter please be aware that you lose half a stop of light.

The Laowa 1.33x Rear Anamorphic Adapter is solidly made and it attaches to cameras and lenses without any wobble or movement.

How do you use it?

Here is where I would have liked to have seen an instruction manual included. I don’t think manufacturers should just assume that the end-user will know everything about the product and how to use it.

Sure, it is just an adapter, but If I am going to be putting something between an expensive piece of glass and a camera I want to be 100% sure that I know exactly what I am doing.

I couldn’t find any answers on the Laowa website as to what the best practices are. Is it better to mount the adapter to your camera first or place it directly on the lens and then attach it to your camera? What are the markings on the side of the adapter? Is there anything I should be careful of?

Even a simple tutorial video would go a long way towards helping customers out.

In Laowa’s defense, it is really easy to attach and use with the OOOM lens. This is no surprise because it was designed specifically for this lens. However, with other lenses, it isn’t quite as easy.

What lenses does it work with?

You can use the 1.33x Rear Anamorphic Adapter with other lenses, apart from Laowa’s OOOM.

Above you can see the list of lenses that Venus Optics has tried with the adapter. This is not to say they won’t work with other lenses that are not on the list, however, you should use the Clearance Check tool which you can print out to ensure compatibility. You can download that tool below:

The one niggling complaint I have is that I think Laowa should have included at least a cardboard or plastic tool for checking lens compatibility. Using a piece of paper is far from ideal and when you are dealing with expensive lenses you want to use a tool that is exact.

Now, as an example, I tried to use the adapter with my Angenieux Optimo Style zooms that are on the list as being compatible lenses. They didn’t fit according to the clearance tool and I couldn’t find any information anywhere about how they are supposed to attach to the adapter.

What I ended up having to do was to remove the small back cover that was on the 30-76mm that is labeled ‘Remove for Panavision’. I also had to adjust the position of the markings on the side of the adapter. This is key information that should be listed somewhere by Laowa. In their defense, as I previously mentioned, this adapter is meant for the OOOM zoom that has a very short mount. Perhaps I am being a little harsh here, but it was information I needed to know when wanting to use the product.

UPDATE: The marking adjustment is apparently for adjusting sharpness, however, it does physically slightly move the rear element slightly so you have to be careful when doing this.

Do you lose sharpness?

Adding anything with glass in the optical chain is going to change your image. Sometimes the results can be so minor that there is almost no perceived difference but on the flip side, you can also get fairly drastic changes to your image. So what happens when you use the 1.33x Rear Anamorphic Adapter?

I was curious to see if there was any perceivable loss in sharpness when using the 1.33x Rear Anamorphic Adapter and if there was also a loss of corner sharpness.

From my testing, I found that you certainly do take a hit when it comes to sharpness (but please see my above update on this on the updated test below). Above you can see a short test where I used the 1.33x Rear Anamorphic Adapter with an Angenieuix Optimo Style 30-76mm T2.8 zoom. I did the exact same test with and without the adapter at 76mm with the lens set at T2.8. As you can see, you certainly lose quite a lot of sharpness when using the 1.33x adapter.

UPDATE: Above here is another test I did with the 1.33x Rear Anamorphic adapter and the Angenieux 30-76mm T2.8. I have adjusted the back markings from the softest to the sharpest that was possible I couldn’t get it all the way to max sharpness of the adapter using this lens. On the sharpest setting, I could get it it is reasonably good and not as bad as my first test.

Above you can also see a sharpness test using the 1.33x Rear Anamorphic Adapter on the Laowa OOOM and a Canon C70. As you can see this is not a very sharp combination. You really need to stop the lens down quite a bit for it to exhibit some sharpness. The edge sharpness at T2.8 is pretty bad as you can also see.

UPDATE: I did another additional test with the 1.33x Rear Anamorphic adapter and Laowa OOOM 25-100mm T2.9 with the adapter at its minimum and max sharpness setting. I also compared the sharpest setting against the OOOM when no adapter was used. With no adapter, the OOOM is still slightly sharper, but not by a lot.

What characteristics does the adapter display?

I also wanted to see how my Angenieuix Optimo Style 30-76mm T2.8 zoom reacted to direct lighting sources when using the 1.33x Adapter. Again I did tests with the lens set at 76mm at T2.8 with and without the adapter. As you can see, when using the 1.33x Rear Anamorphic Adapter the lens loses a lot of contrast and flares a lot more when direct lighting sources are pointed at the lens.

I also did a flare test using the Laowa OOOM with the 1.33x Rear Anamorphic Adapter on a Canon C70. You can see that above.

I think what you clearly need to understand when using the 1.33x Rear Anamorphic Adapter on any lens, even Laowa’s own OOOM, is that you are not going to get optically perfect results. This adapter is all about character and not about optical perfection. If you are looking for sharp images then this is not a product for you.

Despite its optical flaws, I really liked the results the 1.33x Rear Anamorphic Adapter gave me. While it isn’t going to mimic a dedicated anamorphic lens it does add enough character that it changes the look of existing optics you may already have.

If you own compatible lenses where you can use the 1.33x Rear Anamorphic Adapter then it is a cost-effective way of expanding the versatility of optics you already own. On a camera like the ARRI Amira, or any other camera that has a dedicated 1.3x anamorphic mode this adapter is a great addition.

It also works really well on any 16:9 sensor camera with a compatible lens.

I went out and shot some material with the 1.33x Rear Anamorphic Adapter, a Canon C70, a monopod, and a variety of different lenses. These are just a bunch of random shots so you can see what the adapter looks like and how it performs in a real-world environment. Please be aware that the results will vary greatly depending on what lens you are using with the adapter. I was using a lot of older lenses that are not super sharp to begin with.

Currently, there are only PL-PL versions of both of these adapters available, but Venus Optics is looking into making other mount versions in the future.

The recommended retail price in the United States (without tax) is $999 USD for the 1.33x Rear Anamorphic adapter. You can also buy the adapter with the 1.4x Full Frame Expander in a kit for $1800 USD.

As I have already mentioned, the 1.33x Rear Anamorphic adapter is a good way of adding some extra versatility to lenses you already own or may rent. If you need to deliver in a 2.35:1 aspect ratio and you are utilizing a 16:9 sensor camera that doesn’t feature any anamorphic modes you can do so without having to letter box your footage and losing resolution.

On cameras such as the ARRI Amira that have a dedicated 1.3x anamorphic mode, this adapter makes a lot of sense.

It is also useful on other cameras that feature 1.3x anamorphic shooting modes, such as more affordable options like the Panasonic S5 or S1H.

Of course, the beauty of this adapter is you don’t need to use it with a camera that had a dedicated anamorphic mode. It will work on any 16:9 sensor camera.

It is this versatility, that allows it to be used on a variety of cameras with a variety of lenses that make it quite unique and appealing.

The adapter certainly does add some character depending on the lens you are using and it can give you a different look. Yes, you are going to take a sharpness hit and you are going to alter your lens’s image characteristics and optical performance, but it is nice that you can do that without having to buy or rent additional lenses.

At the end of the day I enjoyed using the adapter and I liked the results I could get. Yes, it is a little niche, and it isn’t going to be for everyone, but I think that is what makes it an interesting product.