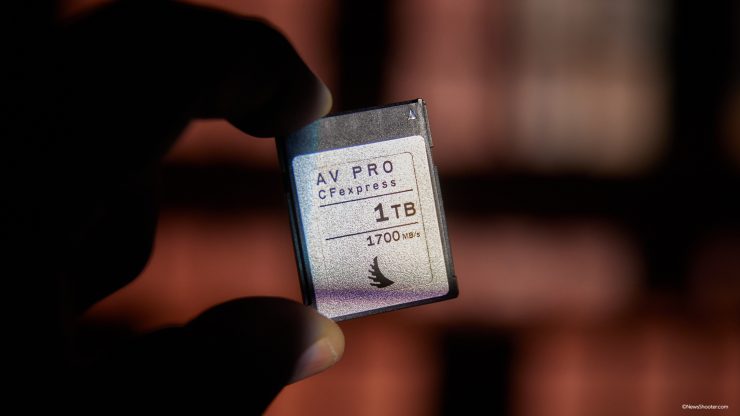 When I picked up a Canon R5, I wanted to use the fastest option the camera can use for media: CFexpress Type B. It offloads incredibly fast, saving me time, especially when shooting video.

CFexpress Type B was introduced in 2019, and while more expensive, you get a good-sized speedbump for your money. For this reason, a lot of cameras won’t use them if the codecs and formats don’t need such fast write times, but I think it is a great idea to have fast read times for offloading. If you have the option, I think it’s a good idea to at least get a couple of cards, but I will warn you that you probably won’t be using those SD Cards much after you do. ;-D

While speed is important, so is the build quality, and the Angelbird CFexpress B 1YB is built like a tank. This is a big deal as I have had several SD cards split in half or have ribs on the back break off, making the cards unusable. CFexpress is much more durable.

With faster speeds also comes larger capacity. Angelbird offers type B cards from 256gGB up to 2TB, and a 4TB version is in the works. I’ve been testing an Angelbird 1TB model, and it’s blazing fast and has been solid in the Canon R5.

When reviewing gear, I like to know exactly how a product performs. With lights, we have tools that can measure color and temperature that are very accurate. With media cards, it’s not as easy to test for actual speed in reading and writing. So to get a base, I have to use my own compatibility with the camera and offloads.

I have a Thunderbolt 3 CFexpress B reader that performs very well. Below are the read and write speed tests using the Blackmagic Design Disk Speed Test app. I set the parameters to a 5GB Stress Test.
The results are below.

In this test, I got a Write Speed of 704 MB/s and a Read Speed of 1134 MB/s. For my purposes, they are plenty fast and fall into compatibility with my R5. The R5, when shooting 8K RAW, requires 400 MB/s or higher write speed.

Angelbird states the CFexpress 2.0 Type B are engineered for maximum sustained performance with protection from overheating and operate at a reduced power draw. This ensures the highest bit-rate captures of RAW video and continuous shooting photography files at resolutions up to 12K.

SUSTAINED READ SPEED 1000 MB/s *
SUSTAINED WRITE SPEED 1000 MB/s *
{ * Speed based on internal testing at Angelbird. Actual transfer rates and capacity may vary depending on the product model, system hardware, and other factors.}

I have always found Disk Speed Test software to not work as well on external media cards. It must be due to limitations of the port being used like USB-3 or Thunderbolt 3. They are primarily designed for testing internal drives, but that is all we have to work with. More importantly, is compatibility with cameras. If they are within the write speeds, then it won’t matter as they will be tested to perform within the camera’s specifications.

With the Angelbird 1TB CFexpress B card getting a read speed of 1134 Mb/s, you know that it will offload very quickly.

Important to note that the operating temperature range is -10 °C | 70 °C / 14 °F | 158 °F. This is a good range and should be noted that buying media that will work in the environments you shoot in is very important.

The list of compatible cameras will grow as new ones are released. Below are the current cameras that are compatible.

Angelbird offers free professional data recovery service on all its products. They will evaluate the issue and safely attempt to recover your data in their lab along with free express shipping. This service covers media that has encountered physical damage and/or software issues such as data or file corruption. Furthermore, Angelbird extends a non-disclosure agreement to our customers to ensure that the privacy and confidentiality of their content are also protected. Check out Anglebird’s info on this on their website.
Angelbird offers a 3-Year Limited Warranty on their media cards.

One thing for sure is I love the speed of these cards, and so far, my Canon R5 does as well. It does make me quite giddy when I see how fast the transfers are. Less time waiting and more time editing. That’s a great combo.

1TB CFexpress cards are not as popular due to them being a fairly new capacity. As you can see below, the Angelbird CFexpress B 1TB cards are priced very competitively at approximately $200 less than the competition.

The Angelbird CFexpress 2.0 B 1TB cards retail for $599.99. Yes, that is expensive, but if you need speed and a camera that uses the format, these cards are excellent. Angelbird also offers the CFexpress 2.0 B from 256 GB to 2 TB and soon a 4 TB version.